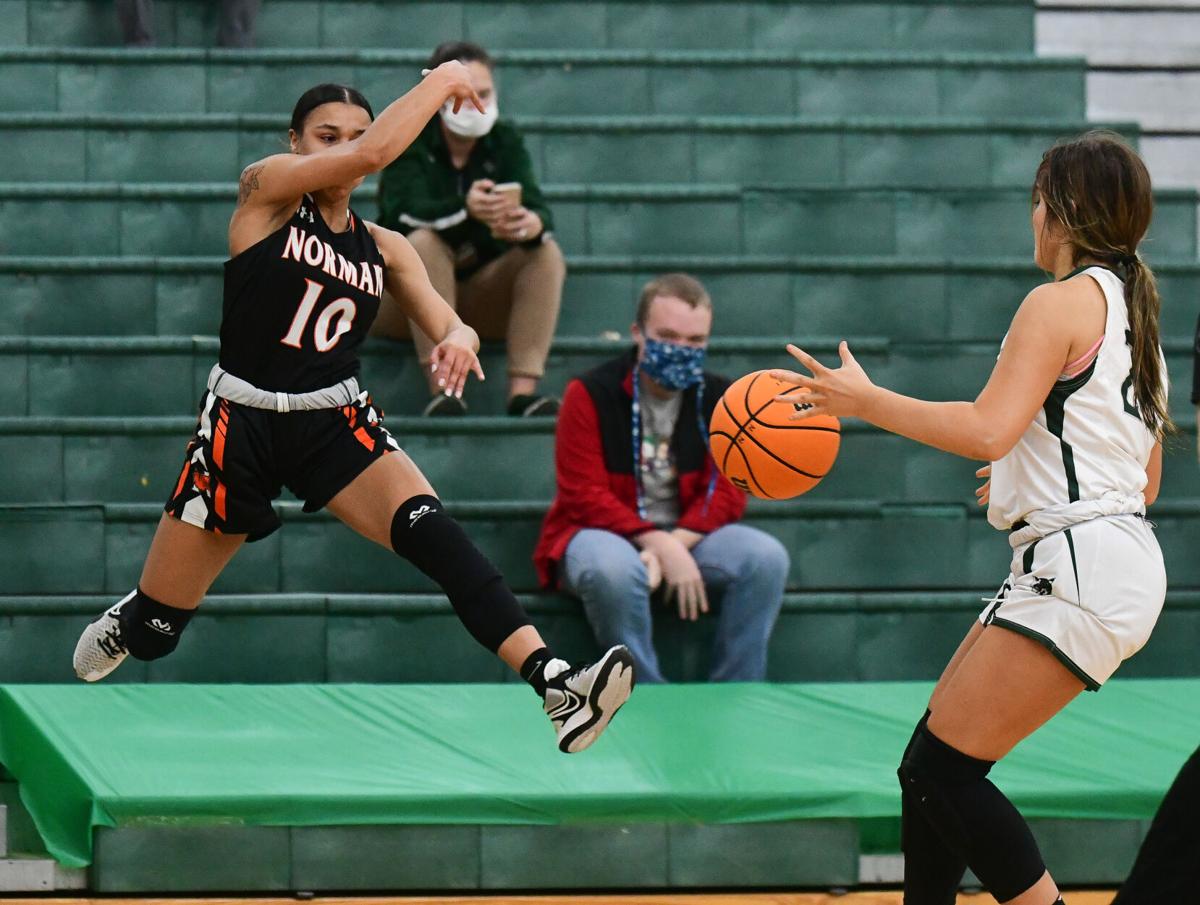 Norman High’s Kelbie Washington saves a ball from going out-of-bounds during the Crosstown Clash on Saturday at the NHS gym. 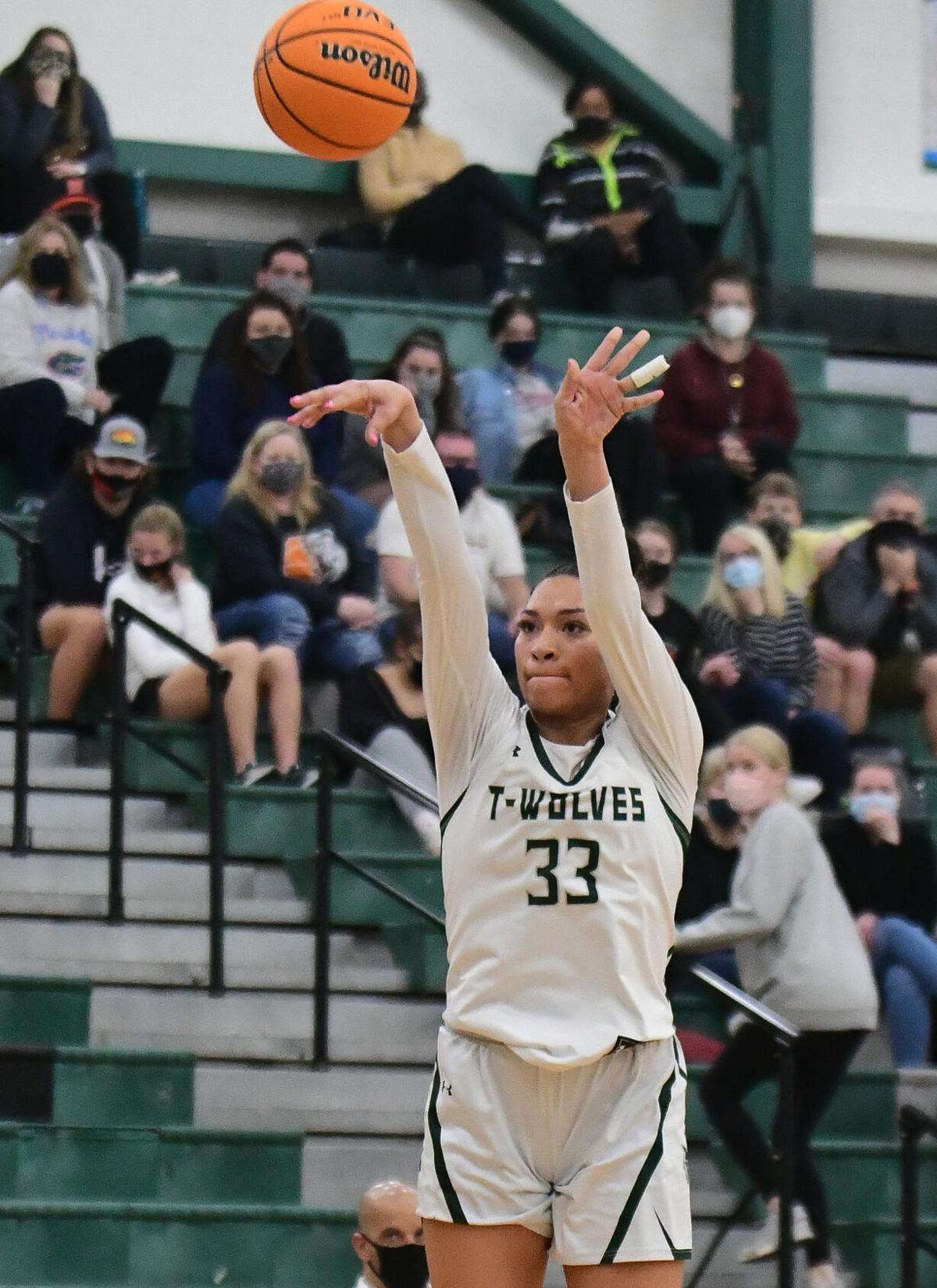 Norman North's Fatima Black shoots the ball during the Crosstown Clash on Saturday at the NHS gym.

Norman High’s Kelbie Washington saves a ball from going out-of-bounds during the Crosstown Clash on Saturday at the NHS gym.

Norman North's Fatima Black shoots the ball during the Crosstown Clash on Saturday at the NHS gym.

A Crosstown Clash in the middle of a pandemic kept away the usual packed house and raucous environment the rivalry comes to expect.

The level of play was still the same with both teams fighting hard for 32 minutes. Norman North was without its leader Kennedy Cummings, who sustained an ankle injury during the T-Wolves’ game against Deer Creek on Friday.

The shorthanded T-Wolves ultimately couldn’t keep up with Norman High’s firepower, ending with the Tigers prevailing 69-37 and moving to 11-0 on the season.

“You know, North is a lot different without their engine Kennedy Cummings,” NHS coach Michael Neal said. “We have a lot of respect for her, and she kind of makes things go for her team.”

Neal said the game would have been much different if Cummings, who is not expected to miss a significant amount of time, was available.

“Coach Rory [Hamilton] does a good job making sure his team is still prepared and will still play hard,” Neal said, “and the score is different if Kennedy’s there.”

Meanwhile, NHS’ starting five came out as strong as ever in the matchup. Out of the gate in the first quarter, the Tigers scored 24 points and only missed two shots.

Up against a zone defense for much of the night, the Tigers would shoot over the zone or often find a player like NHS sophomore Aaliyah Henderson cutting backdoor when her defender looked the other way. Fellow Tiger guard Mikayla Parks showed effort in extending her three-point range Saturday, too, nailing one from more than 20 feet out in the first quarter.

With the first quarter behind both teams, NHS senior Kelbie Washington took hold of the game. She scored a quick seven points and then spent the rest of the second quarter nabbing steals and setting up her teammates.

The Tigers forced 16 turnovers on Saturday, and Washington led all scorers with 18 points. NHS senior post Chantae Embry used some of those steals from Washington to show off her ball-handling skills, scoring four points in the third by running a fast break on her own.

She finished showing off her versatility by hitting a 3 off of a pick-and-pop early in the fourth quarter before NHS’ starters were pulled. Embry finished with 13 points.

North found bright spots down its roster as well with Fatima Black continuing her offensive success, finishing with 11 points. Shamica Smith, against Embry, fought hard and always involved herself in the rebound battle each trip down the floor.

Hamilton had his team engaged defensively all night, and their effort never waned. It was clear the T-Wolves have the foundation they need on that end of the floor.

On Tuesday, 6A’s top-ranked NHS resumes action at Southmoore, while 11th-ranked North is at Mustang.