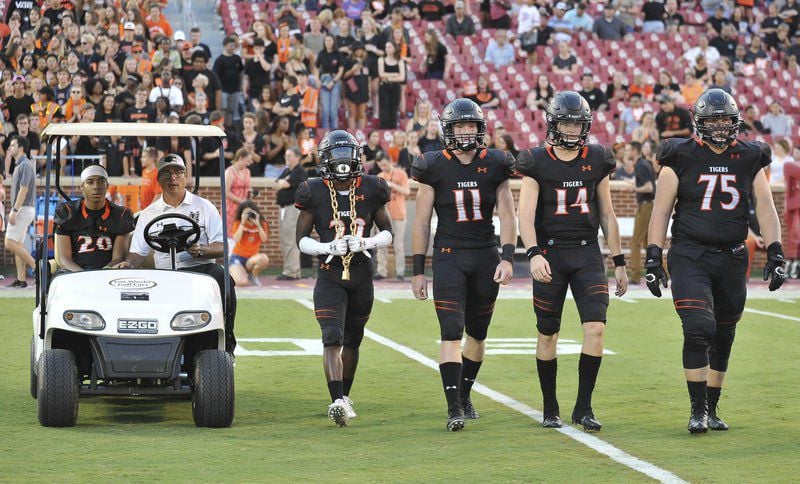 Kevin Randle with his team during the coin toss, Thursday, Sept. 1, 2019, during the Clash football game at Oklahoma Memorial Stadium. 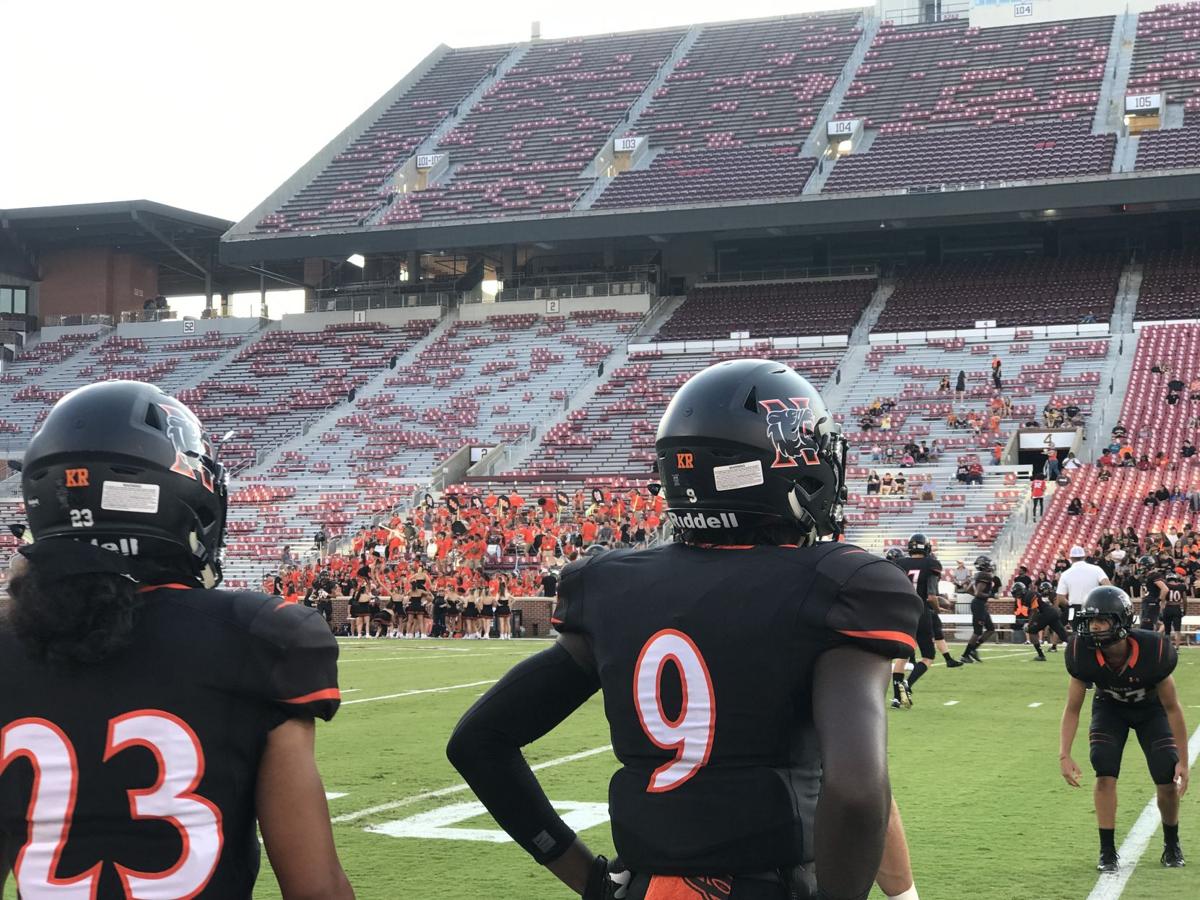 Norman High's players helmet include a "KR" decal on the back of their helmets before a Sept. 5 game against Norman North.

Kevin Randle couldn’t stay for long but his impact endured at Owen Field.

As Norman High’s captains marched to midfield, Randle followed them from the passenger seat of a golf cart wearing his black No. 20 jersey, jeans and a headband.

Randle exited the car and stood side-by-side with his NHS teammates for the Tigers’ coin toss with Norman North on Sept. 5.

Hours later at an Oklahoma City metro rehab center, Randle was filled with excitement as he watched via an online video stream a dramatic NHS win over North.

The NHS senior has been away from the football team he started for last season and in and out of medical facilities the past few months for an illness still unclear to the Randle family.

He was still very much on the minds of the 1-0 Tigers.

“We just thought about our teammate Kevin Randle,” NHS receiver Andrew Young said following the season-opening win. “… Just seeing him, how he's fighting through his recovery really gave us the motivation. When we were down, we just thought about Kevin.”

He developed cold-like symptoms a few days following his return and didn’t get better from the medication his mother, Latoya Randle, provided him.

Kevin went to a Norman hospital, where he received fluids but doctors still couldn’t detect anything wrong with him.

From there, he went home but his health grew worse.

He struggled to walk and see and was taken to another hospital where he met with myriad specialists trying to find the root of his health issues.

Moving his arms and legs became difficult, as did eating and breathing, which ultimately led Kevin to spend the next month and a half in the hospital’s intensive care unit.

“He was just a perfectly healthy boy,” Latoya said. “And then all of a sudden, he just broke down to nothing.

“Just sitting there all day long with him and seeing how he was and he was on so much medication that he couldn't even open his eyes. It was just really ... it was really hard.”

The news was tough for his NHS teammates, who’ve honored his place on the team in several ways.

Along with having Kevin as a captain for NHS’ 2019 opener, the back of each NHS players’ helmet included a decal with the initials “KR” in orange letters.

“These guys, they're like brothers in that locker room,” NHS coach Rocky Martin said. “Anytime something happens to your brother, or your close friends, your teammate, it affects the whole team.

“And so our team and community have done a really good job rallying around Kevin and his family.”

Kevin’s fight included weeks sedated in a hospital bed and at times, dependent on a ventilator.

He wasn’t always fully aware of when people would visit him, so his mother suggested they take a picture with him for Kevin to have when he woke up.

“I think it was really hard on him,” Latoya said. “I was so proud of him because no matter what he didn't quit, he just kept trying and everything they asked him to do, he just did it. And he would try to do a little bit more, because that's just who he is.

Kevin started to take small steps in August and began using a walker later in the month.

Before NHS left its campus for Oklahoma Memorial Stadium for its Sept. 5 game, Kevin visited the Tigers’ locker room where he was met with cheers from his teammates.

Thinking about the senior season he’s missed isn’t easy for Kevin, but he was appreciative to be a Week 1 captain— even if he had to leave at halftime.

“I was a little emotional,” Kevin said. “It was cool that they let me go out there and be a captain.”

His mother was just as emotional.

Latoya doesn’t think of herself as a cryer, but tears rolled down her face as she watched the Norman community embrace her son.

The Randle family is still seeking clarity for the cause of Kevin’s illness. But he is mentally back to where he was before the summer and fighting his way back physically.

“We've put all the tears and all that behind us,” Latoya Randle said. “And we're just moving forward. I think that he's okay. I can see Kevin again. And he's laughing and joking and working on his dance moves.