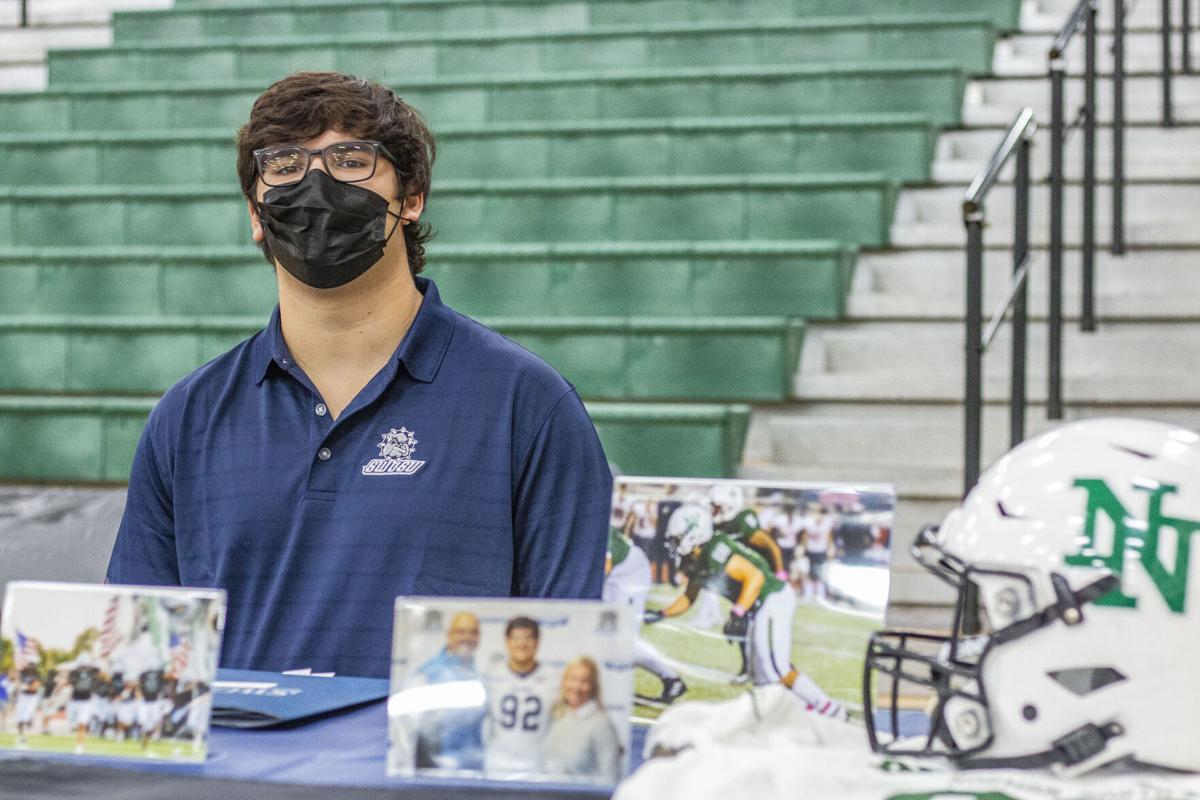 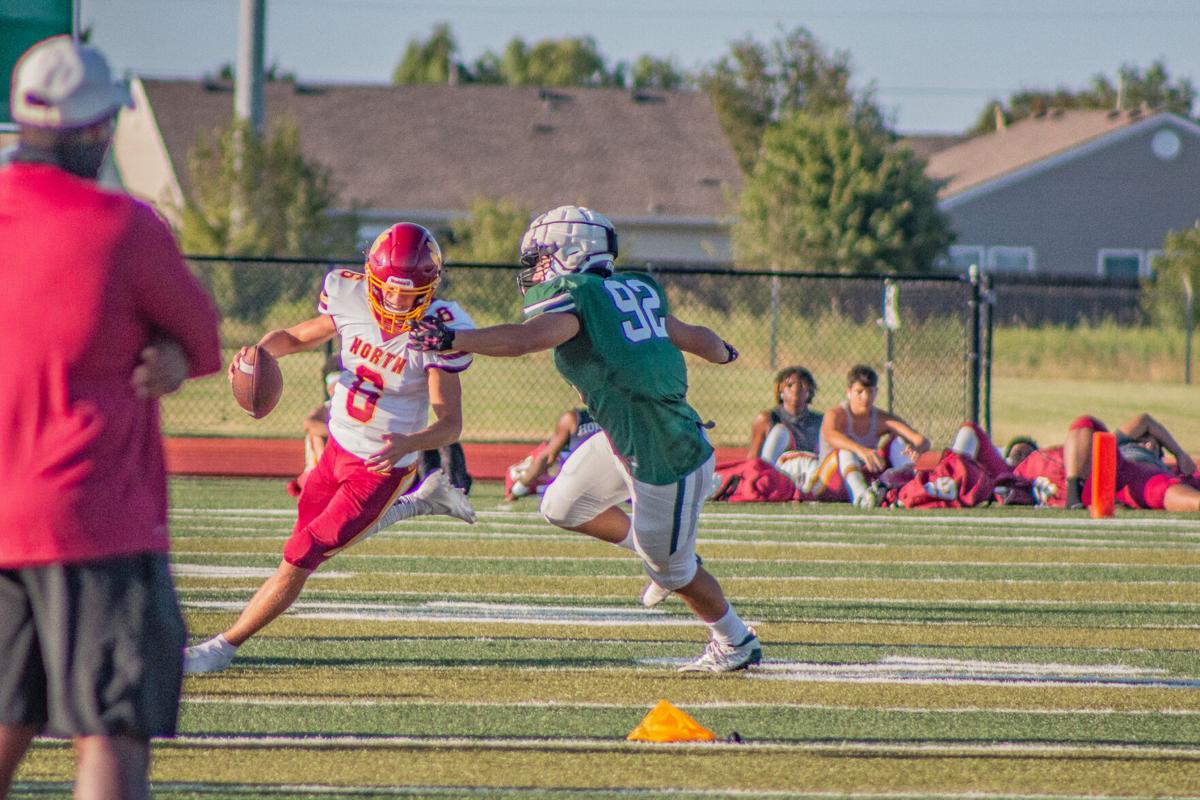 Erin Hassen never envisioned her son, Pierce, playing college football. Not a year-and-a-half after she learned he was involved in an automobile accident, raced to his location and ran down Flood Avenue, unsure if he was OK.

Yet, Pierce Hassen, a Norman North senior, is headed to Southwestern Oklahoma State after inking his letter of intent and celebrated his achievement with family, teammates and classmates inside North’s gymnasium Wednesday morning.

Pierce Hassen struggled to comprehend the moment himself.

“I still can’t believe it really,” he said. “... It’s just so crazy to me that I’m even going to play college football at all.”

Hassen scrambled to get ready for a 6:30 a.m. workout, the last of the summer before the arrival of Norman North’s 2019 fall football camp.

The 6-foot-2 defensive lineman woke up late and needed to give his teammate, Gabe Trevillison, a ride. Still settling into the August morning, he eventually made it to the T-Wolves running back’s home and they were on their way to campus with their third year of high school quickly approaching.

To that point, Hassen had yet to cement his place on the North varsity. Perhaps his junior year would be his breakout season.

But then it all came to a halt.

Driving down Flood Avenue, Hassen, struggling to stay awake, was involved in an accident. His vehicle collided nearly head on with another car before his eventually flipped over.

Between Trevillison and the other car’s driver, both left the scene unscathed. Hassen, however, had a long rehabilitation process ahead of him after his left hand went through his car window and was caught between the top of the vehicle and the road.

“It was one of those things that was kind of your worst nightmare come true,” Erin Hassen said. “It’s like, you hear your son’s hurt from a stranger who called. So, we made it there about the same time the emergency people were there. … We parked and I was running down Flood, and then when he starts going, ‘Mom, mom, I’m sorry, I’m sorry,’ I just started bawling.”

The same day, Hassen went into surgery to repair the tendon damage his broken hand endured. The four-hour procedure was ultimately successful, but his athletic future was uncertain at best.

He missed his entire junior football season, but was present at practice each day and took mental notes. He wasn’t able to start lifting weights again until December arrived, albeit he was limited, and remained in physical therapy for two hours, three times a week, for another two months.

“I was never normal,” Hassen said of first returning to the weight room. “I mean, even until halfway through [this past] season, my hand was still kind of getting used to it, it’s so sensitive. Thank goodness, we didn’t have any cold games.”

Hassen is grateful he was able to play at all.

As soon as he got out of physical therapy, the COVID-19 pandemic hit high school sports, putting his final football season at North in jeopardy.

Soaking in every summer workout, preseason scrimmage and game was vital to Hassen and his family, not sure if COVID-19 would allow the 2020 season to happen, let alone his emergence as one of North’s best assets on defense.

“Every game this year, we came in with a just ‘we’re happy to be here’ attitude and that we wouldn’t care what the score is,” Erin Hassen said. “As long as he gets to play and have fun, that’s all we want.”

Pierce Hassen gave his family that and more.

Through North’s shortened eight-game regular season, Hassen led the team with seven tackles for loss and 3.5 sacks to go with 64 total tackles. The senior defensive lineman helped the program earn its first winning record and state playoff berth since 2017 and first playoff victory since 2016. All that was left for Hassen, who was recently named an Oklahoma Coaches Association All-State selection, was a scholarship offer.

Hassen’s senior season ended Nov. 20, following a state quarterfinals loss to Jenks. He didn’t think much about football over the next seven days until he started putting together a highlight video of his lone varsity season, hoping an interested coach would see it.

SWOSU came through with Hassen’s offer on Dec. 1 and earned his verbal commitment a month later.

It’s not quite how Pierce Hassen drew it up, or even thought possible a year ago. But the future Bulldog will take it.

He understands how lucky he is the accident wasn’t worse, and showed his gratitude through his response to the adversity he faced.

“There’s that moment of time that could have sent him one of two ways, and he chose to fight and deal with it,” said North head football coach Justin Jones. “And not only that, but then, the whole time when he’s rehabbing and he’s coming back, whether he’s gonna play again or not, no one knows, and he still continued to lead our team, showed up and just was a positive part.”