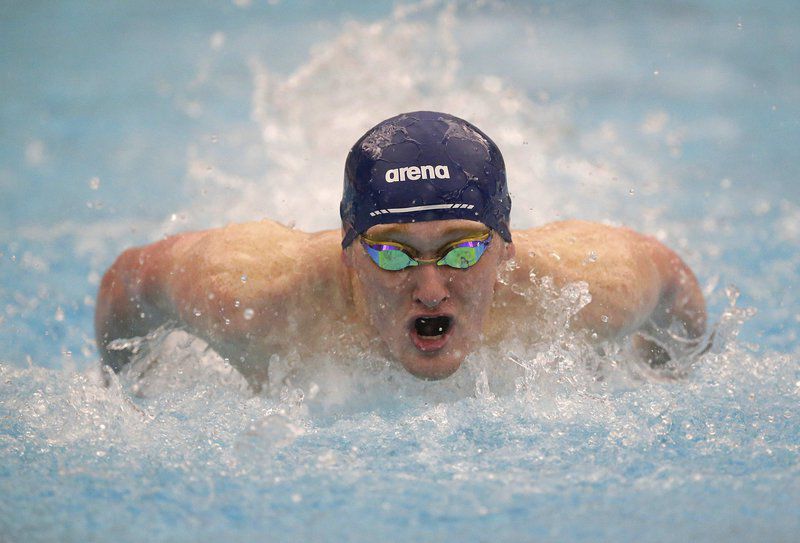 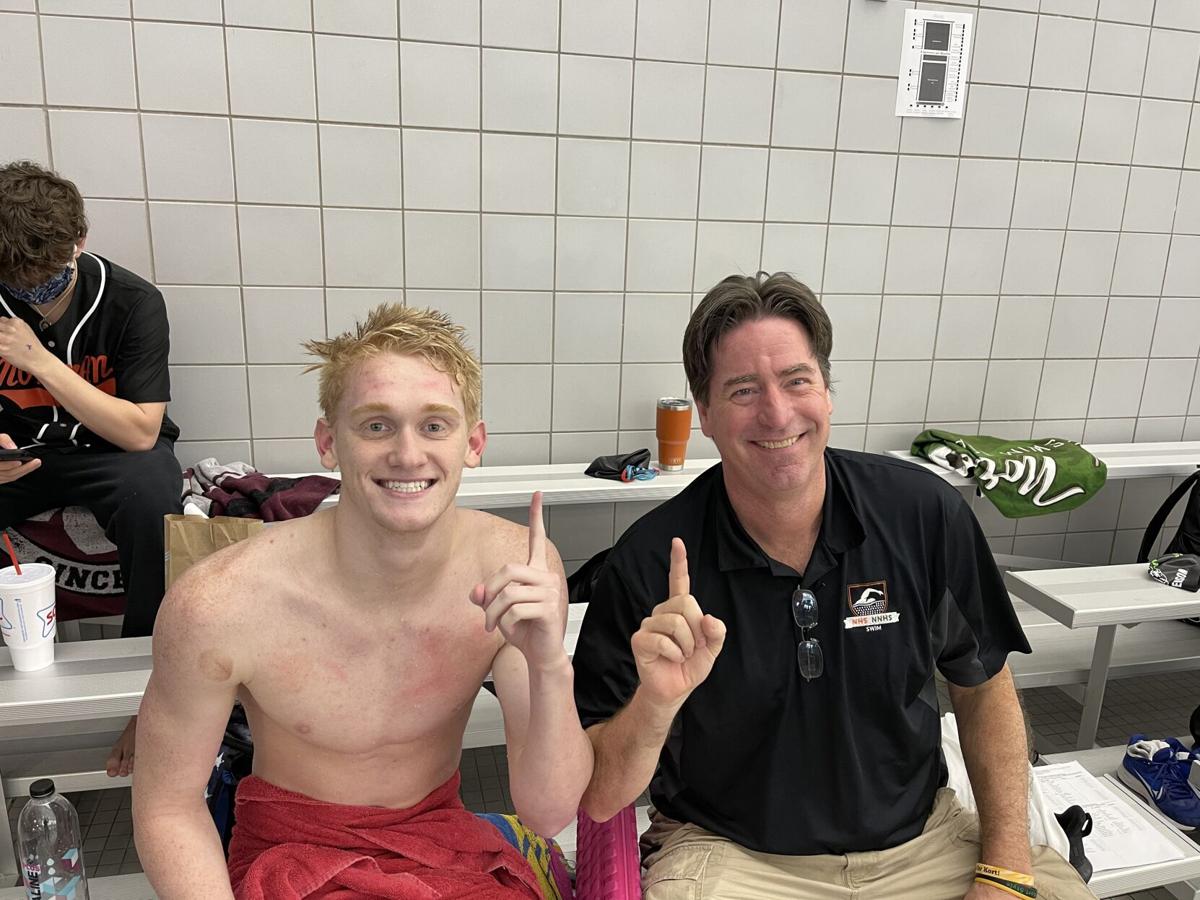 Aiden Hayes and his high school and Sooner Swim Club coach, Kent Nicholson, at the Class 6A state swim meet in Jenks. That was in March. Friday, Hayes competed in the second of his three events at the U.S. Olympic Trials in Omaha, Nebraska. (Ben Hayes / For The Transcript) 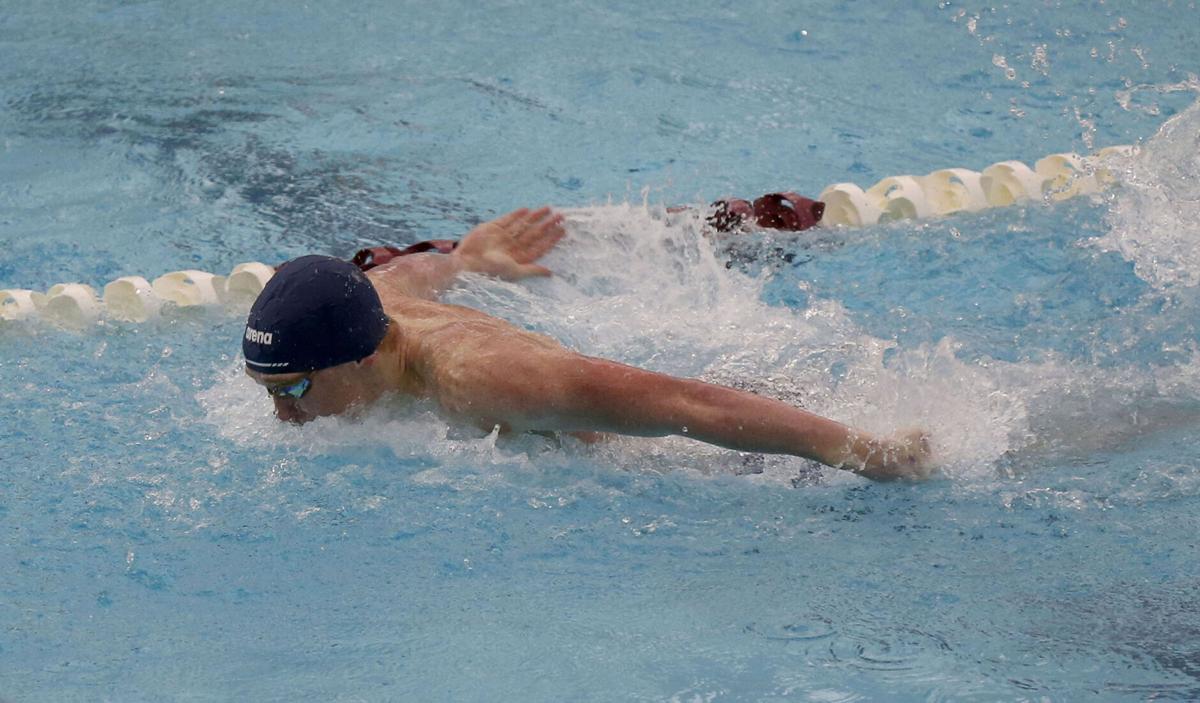 Norman North’s Aiden Hayes breaks a state record in the 100-yard butterfly at the Class 6A boys state swimming championships in Jenks on Thursday, Feb. 25, 2021.

There is a mountain of data suggesting Aiden Hayes will only get better, bigger, stronger and faster in the pool, continuing to excel on several stages.

A two-day car trip, he’s scheduled to arrive in Raleigh by midday Monday, move in on Wednesday and begin classes on the 16th.

Soon, he’ll have the opportunity to be one of the best swimmers in the Atlantic Coast Conference and the NCAA, not to mention the nation and the world beyond his place with the Wolfpack, because that comes with the territory when you’ve already competed at the U.S. Olympic Trials and recently earned membership on the 21-man U.S. National Junior Team.

In fact, the international stage will come before the other stuff.

Next up on Hayes’ competitive calendar — not counting the pool he’ll share with his Wolfpack teammates, several of whom are on the USNJT, too — is the FINA World Cup, which doesn’t just take place in Berlin Oct. 1-3, but resumes in Budapest Oct. 7-9, giving his passport a workout.

Past performance aside, there’s every reason to believe Hayes will only get better, bigger, stronger and faster in the pool, continuing to excel on several stages, based solely upon the way he’s feeling about his sport right now.

“Right now,” he said, “I’m taking my first official break in nine years. I really haven’t swam in about a month.”

What makes it “official” is he’s never had a real break since diving into the sport as a youngster.

“Maybe one or two weeks all year,” Hayes said, though he immediately qualified the statement, saying his time off had not been entirely off.

He’s free from the water for another week or so — “On the 16th,” he said, “I’m back at it” — but the amazing thing may be what the break has spurred inside of him.

His Sooner Swim Club coach, Kent Nicholson, who also helms North and Norman High’s programs, has called Hayes “a prodigy” even though Hayes never really saw it that way.

Apparently, the natural attributes that made Hayes so noticeably outstanding, so quickly, are not limited to the physical.

Take him out of the pool for his first truly extended break and he can’t wait to get back into it.

“I’m probably more obsessed with swimming right now than I ever have ben,” Hayes said, “which is actually more the opposite of how I thought I might feel.”

Given that revelation, maybe the last year of Hayes’ competitive life, the historic accomplishment, is not less stunning, but less surprising.

On the first day of the meet, he broke his own marks in the 50 free and 100 fly, as well as former teammate Daniel Wilson’s mark in the 100 free. On the meet’s final day, he set them all over again and that wasn’t the half of it.

He finished the 50 free in 19.20, marking a new national public high school record. Exactly 13 minutes later, he finished the 100 fly in 45.47, shattering his day-before new state mark by half a second, setting a national high school record for public and private school competitors. In his final race, the 400 free relay, he led off the first 100 in 43 flat, taking almost another half second off the state mark he’d set the day before, when he bettered his old teammate’s time.

Competing in national events alongside his high school schedule, Hayes qualified directly for the Wave II stage of the Olympic Trials in three different events, the 200 fly, 100 fly and 50 free.

Though he’s been out of the pool a few weeks, the honors keep coming.

It’s been a glorious time, but not an easy one.

“It was a really, really hard year,” Hayes said.

The COVID pandemic actually gave him more time to train, more time to spend in the pool, because his schooling did not demand the same raw hours it would have in more normal times.

“Those records were not possible without the time I was able to put into the pool and to put less into school,” Hayes said.

Not that he’d want to repeat it. Indeed, he believes he has a new perspective.

For the last three years, Hayes said, it was always about reaching the Olympic Trials, the dream he fulfilled in June, inside CHI Health Center in Omaha, Neb., the 17,500-seat home of Creighton basketball.

That journey complete, finally with some time to internalize it all, he has a thought.

“This sport is about much more than one week or one race every four years,” he said.

The data says Aiden Hayes will reach many more destinations. On his way to college, he can’t wait to get back on the journey.