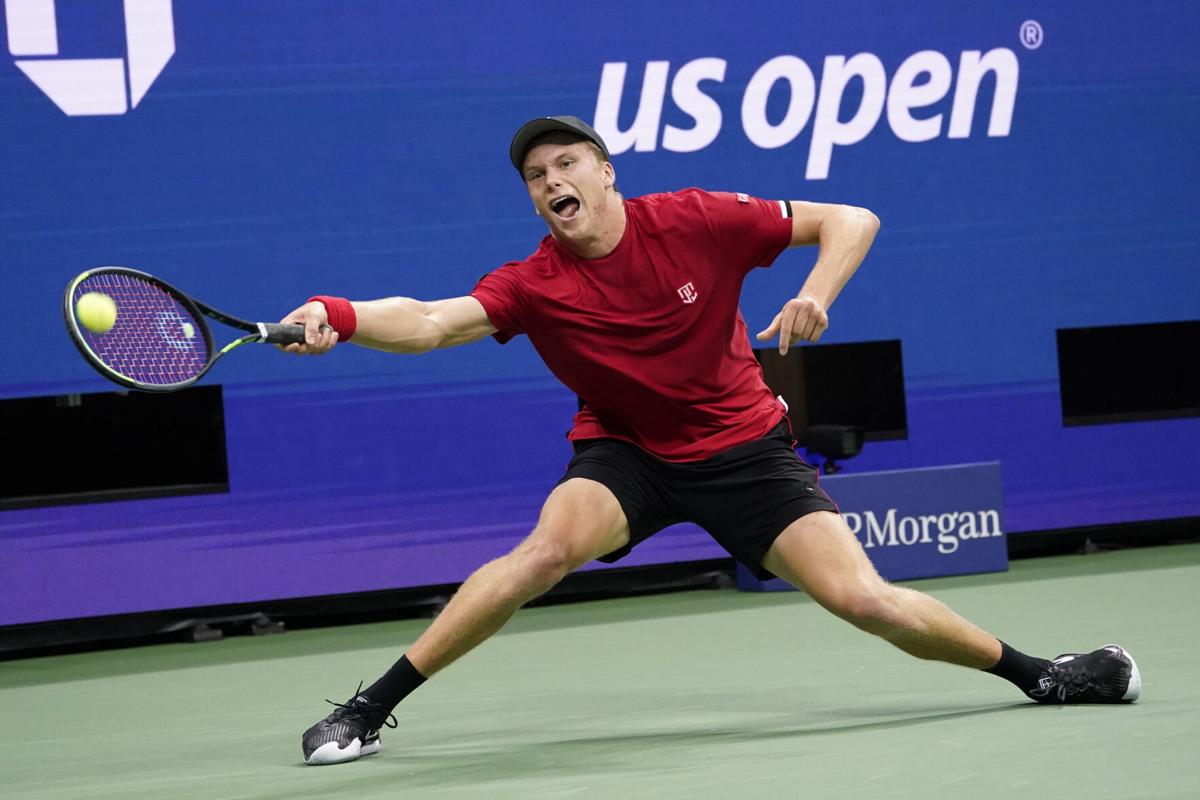 Jenson Brooksby, of the United States, returns against Novak Djokovic, of Serbia, during the fourth round of the US Open tennis championships, Monday, Sept. 6, 2021, in New York. (AP Photo/John Minchillo) 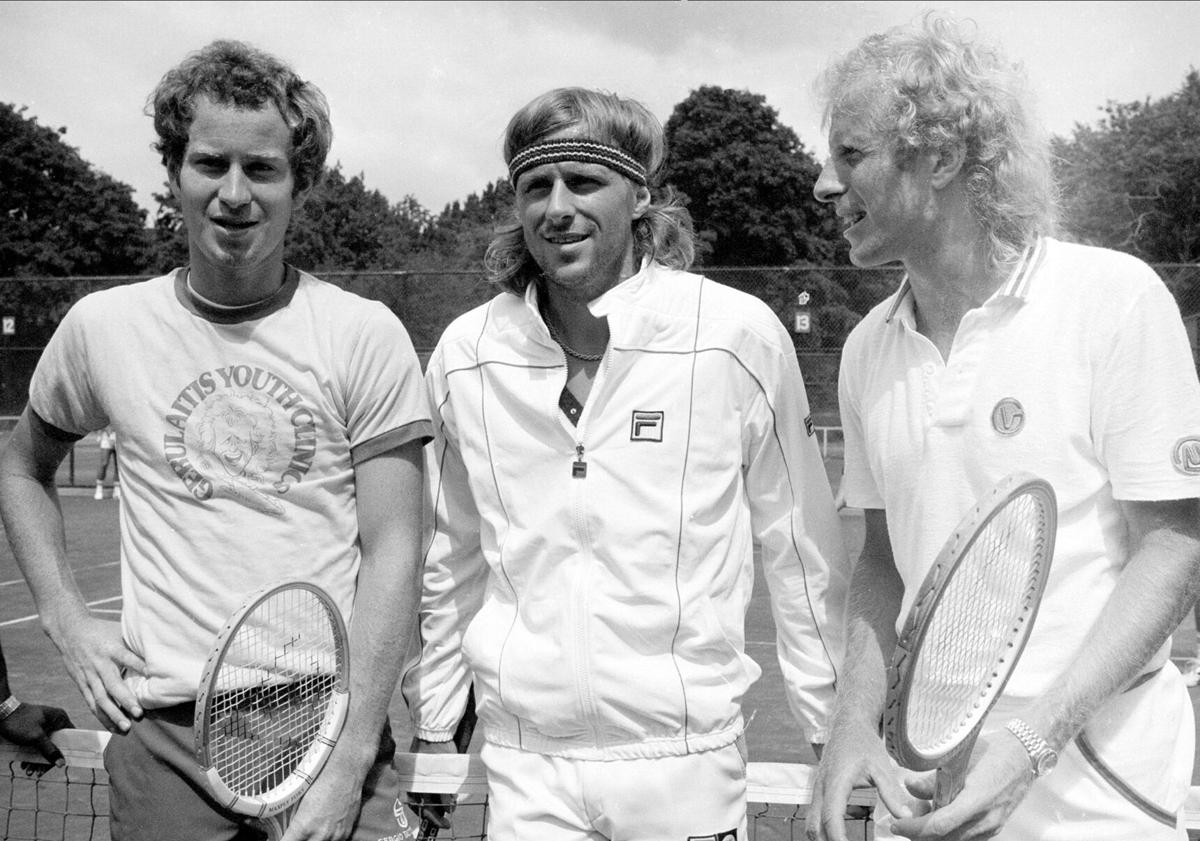 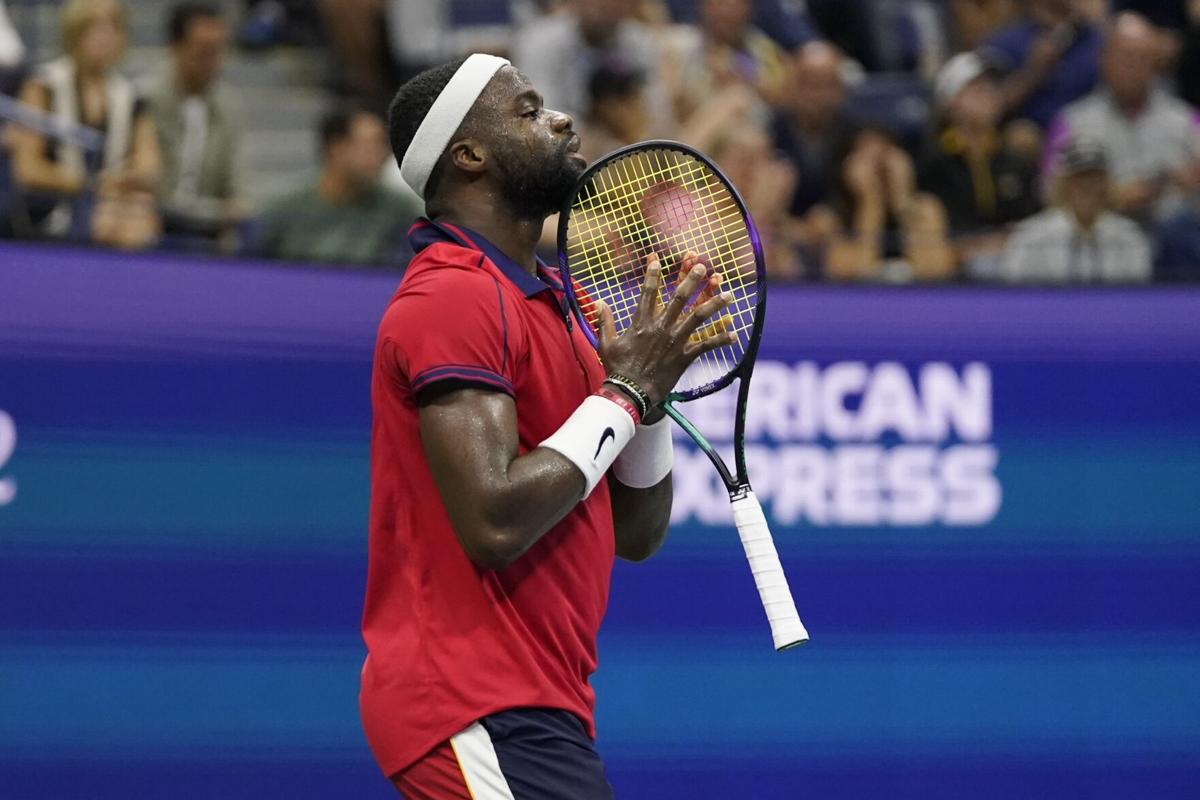 Frances Tiafoe reacts after winning a point in a tiebreaker during his match against Felix Auger-Aliassime in the fourth round of the US Open Sunday in New York.

Only this week, something happened that hasn’t happened in 10 years and, good chance, you have no idea it happened.

Three American men reached the round-of-16 at the U.S. Open. You know, the tennis tournament in New York every year, not the golf tournament that hops around.

You may know it as the tournament Novak Djokovic must win to become the first man to capture the Grand Slam — Australian Open, French Open, Wimbledon, U.S. Open — in a calendar year since Rod Laver did it, unbelievably, seven years apart, in 1962 and ’69.

The American trio includes Reilly Opelka, who is 6-foot-11, Jenson Brooksby, who is only 20 and had the audacity to turn pro after a redshirt season at Baylor and Frances Tiafoe, who won his first U.S. Open match as a 17-year-old in 2014, but never three straight at Flushing Meadows or any other major venue until last year and this year, too.

Or maybe you have to be the right age and the right kind of sports fan to think so.

Before he died, to my internal (and external) horror, his last hole in one was his fifth, even though he had none, best I can remember, when I got my third, more than 20 years ago.

I was playing with him when he got the last one. This is what I said:

I’m still waiting on my fourth

That he saw himself as an athlete and was super competitive was part of it, but apart from that, he played tennis because it was cool.

I’m not making this up, but there were guys in his group of 10 or 12, who’d break into doubles teams and play two, three or four sets at The Sportsman’s Club — pool and tennis, no golf — in Oklahoma City, who had bars in their trunks.

Like, do you want a screwdriver or a Bloody Mary before 8:30 in the morning?

My dad wasn’t a drinker.

He outlived most of them.

Still, talk about the last vestiges of a Mad Men world.

It was gloriously cool.

How many American golfers were stars in those days? Beyond Gary Player, almost all the stars were American, and still not many.

After that, it’s Ray Floyd, Hale Irwin, Tom Kite, Tom Weiskopf, Hubert Green, Larry Nelson and Jerry Pate, who might pop up and win a major, even two — Floyd won four — but they weren’t stars.

Tennis players, they were cool.

Arthur Ashe was a social warrior. He played his first Davis Cup in 1963, won the ’68 Open, the ’70 Australian and, most famously, frustrated Jimmy Connors, the best player on the planet, to win Wimbledon in ’75. He was the tip of American tennis spear. He was still in the top 10 as late as the end of ’79.

In those days, Muhammad Ali was the most famous athlete on earth, but Ashe, Connors, John McEnroe and Vitas Gerulaitis were up there.

Before that generation had left the scene, Jimmy Arias, Aaron Krickstein, Bill Scanlon, Michael Chang, Andre Agassi, Pete Sampras and Jim Courier were on the scene. The U.S. men’s tennis cup runneth over.

Then Tiger Woods came along and … though it’s hard to draw a direct correlation, golf became cool, tennis a second thought and, if not for Venus and Serena Williams ever since, American tennis might have no pulse at all.

In a world in which the best three players — Djokovic, Rafael Nadal, Roger Federer — haven’t been in their 20s for years, Opelka, Brooksby and Tiafoe may only be approaching their primes.

All are on the move.

Brooksby entered the Open ranked No. 99, and only on a wild card entry at that, but turned it into a fourth-round finish, only exiting after taking the opening set from Djokovic 6-1.

Tiafoe, ranked 50th, was the closest of the three to reaching the round-of-eight when, after splitting the first two sets, lost a third-set tiebreaker (8-6) to 12th-seed Felix Auger-Aliasame that sort of decided the match.

If you’re the right age, if you inhaled sports in a pre-ESPN world, or even in an ESPN world in which the best thing it put on was Davis Cup tennis, you know the history.

You remember McEnroe’s Wimbledon debut as an 18-year-old in 1977, Connors’ age defying run into the ’91 Open semis, 17 years after first reaching No. 1. You remember Gerulaitis’ horrible accidental death, when, just 40, he suffered carbon monoxide poisoning staying in a friend’s guesthouse.

Because you were hooked on them, you remained engaged and remember Sampras and Agassi at the 2002 Open final. Both in their 30s, you knew, but for Andy Roddick, there was nobody coming up behind to carry the flag.

Just maybe, that’s changing. It’s nice to think about. Because tennis used to be so cool in this country.