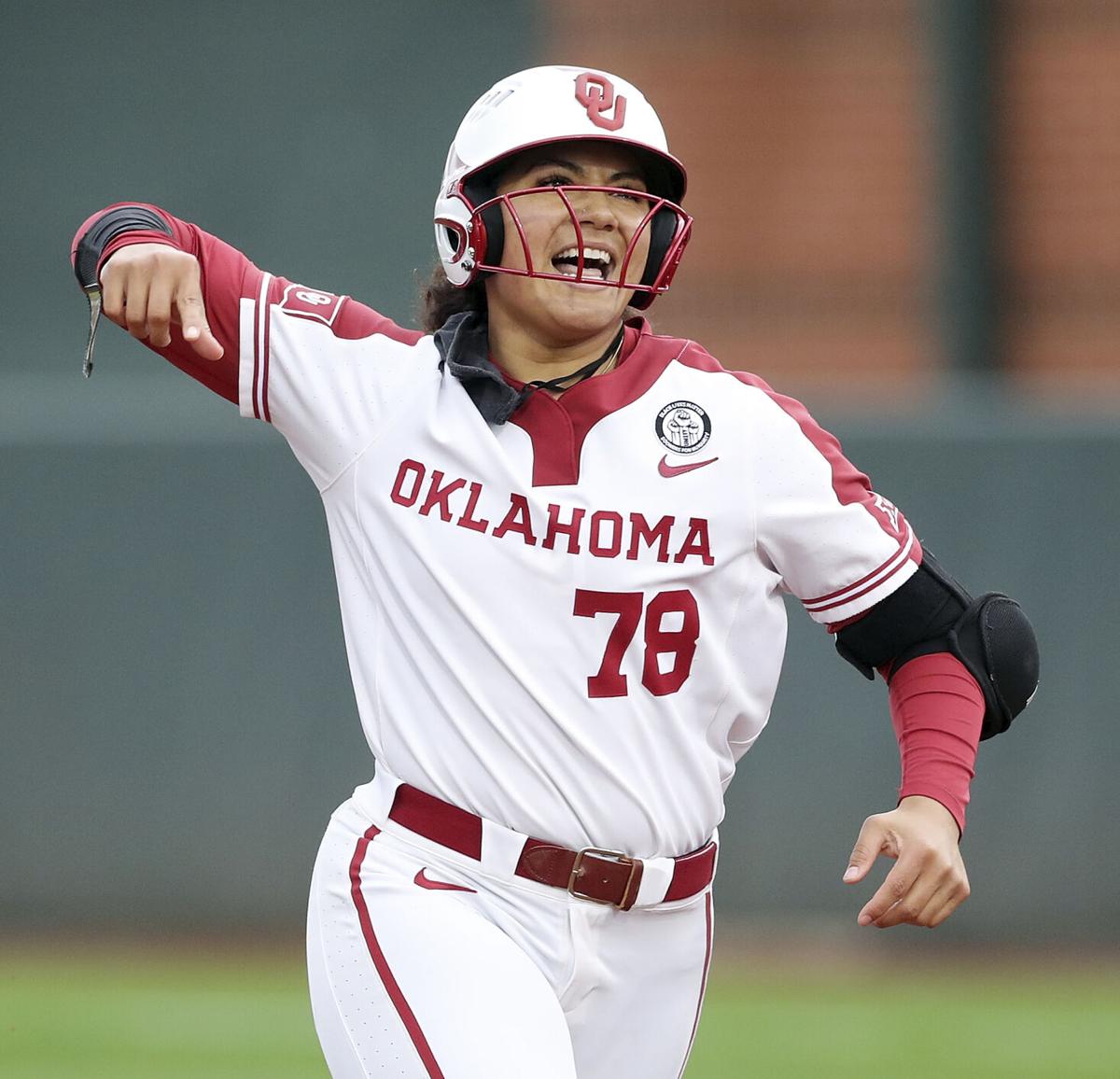 Oklahoma’s Jocelyn Alo celebrates during against Texas last Friday during the Sooners' run-rule victory over the Longhorns at Marita Hynes Field. 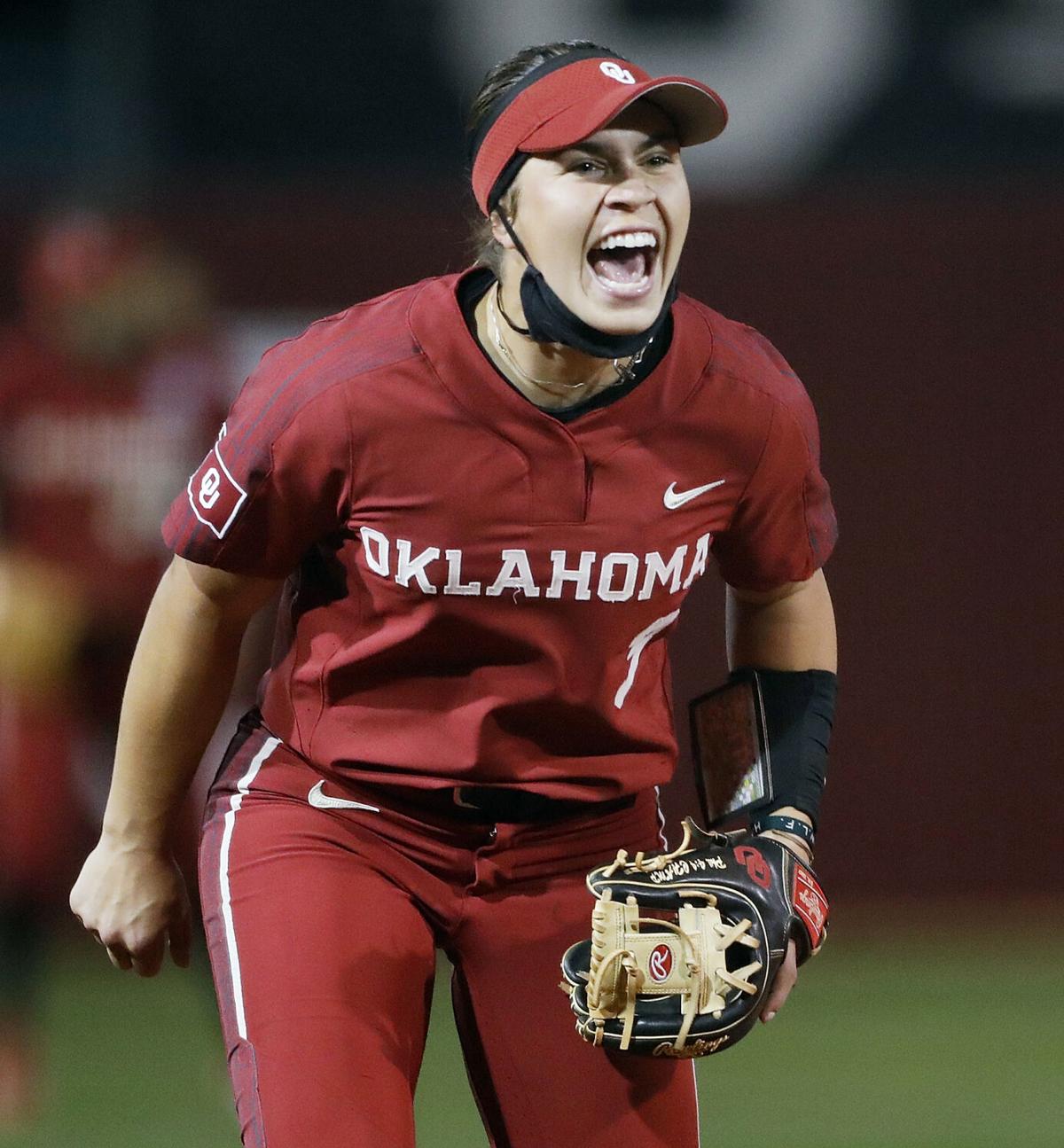 If you look hard enough, you can find its mortality, maybe its fragility, and that’s a little crazy, too.

That crazy team was supposed to play host to Texas Tech on Friday, yet weather pushed the game to 1 p.m. today, the second of the three-game set to follow before the series wraps up on Sunday.

You may have heard, Oklahoma is no longer unbeaten, having fallen 7-6 in nine innings at No. 21 Georgia on Tuesday, making the Sooners’ record 33-1. But what you may not have known is OU came right back and run-ruled the Bulldogs, 12-3, in five innings, before departing Athens.

“I don’t regret one thing,” Gasso said of traveling into a different time zone in the mid-week to play a strong SEC program. “Taking this trip was important for us to learn.”

She probably meant that her team needed reminding it’s not invincible, that it’s bound to face future difficult atmospheres and close games no matter how insanely strong it is and she’s probably right.

Still, give the numbers a long look and it’s easy to imagine OU’s ultimate success will rise and fall on the simplest notions.

One, against the nation’s best pitching, what it’s bound to face at the World Series, will it continue pounding the ball the way it’s been pounding it?

Two, can its pitching keep it from having to outslug every foe it faces, because pitching, believe it or not, might be, relatively speaking, at least, its weakness.

Enough evaluation, on with the insanity.

How crazy is this team?

Let us count at least a few ways.

Instead, it’s that four of the top nine hitters, almost half the top 10, in all of Division I, which includes 290 teams, are Sooners AND two of those Sooners are freshmen.

• 2: Think back to each one of Gasso’s national championships and in all but one, you can’t help but associate it with a single pitcher (and the other one, two pitchers).

Lauren Chamberlain was 1B, alongside Ricketts 1A, but it’s mostly been the pitching.

Still, though the closest thing OU has to a No. 1 pitcher, giving her the title remains a stretch. She’s pitched more than the others, perhaps against better opponents, but barely.

A case can be made the staff is actually very deep. You can make a better case, perhaps, that depth as a euphemism for the lack of a No. 1 also applies and how can the nation’s best team lack a No. 1 pitcher?

Chamberlain’s NCAA record 95 home runs had to be in jeopardy, right? Well, not so fast. In Alo’s next two seasons, she hit 24 total.

It’s not clear how many games OU has yet to play this season, but another 15 dingers might be doable and if that happens, Alo will be sitting on 92, making her certain to break Chamberlain’s mark next season, when she takes advantage of a second senior year, awarded by the NCAA to her and everybody else in the wake of the coronavirus.

Alo’s been up, down, down further and way, way up again.

• 4. Imagine where Alo’s totals might be if the Sooners weren’t so collectively dominant at the plate. Or where Jennings’, who’s hit 20, might be. If all of their teammates weren’t mashing, too, they might well be mashing more.

OU has played 35 games this season, but has averaged just 5.1 half innings per game in which they’re at the plate because they’ve won so many by run-rule.

Had they played 35 seven-inning games, Sooner pitchers would have thrown a cumulative 245 innings by now, yet they’ve tossed 197 2/3 instead, an average 5.65 innings per contest.

The more you hit, the more at bats you get, innings aside.

• 5. By the NCAA’s own metric, its ratings percentage index (RPI), the team that’s won 34 of 35, that’s run-ruled everybody, even Texas, with it’s No. 3-in-the-nation-.368-batting-average, three times; somehow that team, the one everybody ranks No. 1 … is not the best team in the country?

Or even the second, third, fourth, fifth or sixth best team in the country?

It’s a strength-of-schedule thing, but it still feels way out of whack.

That, believe it or not, were the ratings and records entering the week, before the Sooners lost.

If the Sooners want chips on their shoulders, they need only paste the NCAA’s RPI on their lockers.