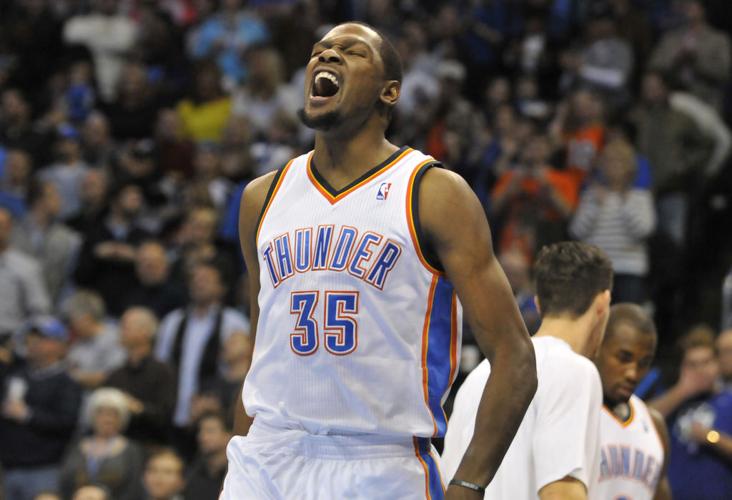 Oklahoma City's Kevin Durant gets geared up before the Thunder's game Sunday against Houston at the Chesapeake energy Arena. Kyle Phillips / The Transcript 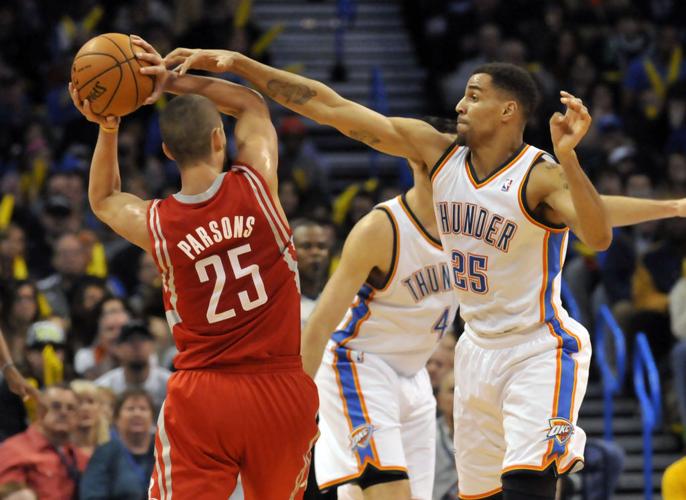 Oklahoma City's Thabo Sefolosha swipes at the ball during the Thunder's game Sunday against Houston at the Chesapeake energy Arena. Kyle Phillips / The Transcript

Oklahoma City's Kevin Durant gets geared up before the Thunder's game Sunday against Houston at the Chesapeake energy Arena. Kyle Phillips / The Transcript

Oklahoma City's Thabo Sefolosha swipes at the ball during the Thunder's game Sunday against Houston at the Chesapeake energy Arena. Kyle Phillips / The Transcript

When Oklahoma City announced that Russell Westbrook was going to miss a few weeks as his knee healed, the prevailing thought was that Kevin Durant would have to step up his game. Even though he had been playing at an All-Star level, even more would be expected of him if the team would survive the loss of Westbrook.

However, unlike when the team lost Westbrook in last year’s postseason, this Thunder squad believes it doesn’t have to be all on Durant’s shoulders. They showed that Sunday when they rolled over the Houston Rockets 117-86 at the Chesapeake Energy Arena.

“Going through that kind of prepared us for this time,” Durant said. “It’s still tough not having him here, but we know what we have to do. We learned from our mistakes last time. We just keep getting better.”

As well as the Thunder played, the Rockets had one of their worst performances of the season, which didn’t sit well with coach Kevin McHale.

“We didn’t play well the whole night,” McHale said. “They outplayed us. They were more aggressive than we were. They attacked. We couldn’t find a lineup that could work.”

Durant scored 33 points and grabbed 13 rebounds to lead Oklahoma City (25-2) to a second consecutive win without Westbrook. But while Durant shone as usual, it was the Thunder’s supporting cast that stole the show. Jeremy Lamb came off the bench to score 22 points while Reggie Jackson added 16 points and eight assists starting in Westbrook’s place.

Houston (21-12) was led in scoring by reserve guard Aaron Brooks, with 17. Chandler Parsons added 15 points. Dwight Howard was held to nine points and nine rebounds and guard James Harden scored eight points on 2-for-9 shooting. As a team Houston compiled a total of eight assists and was outrebounded 49-38.

“It wasn’t good at all,” Harden said. “We just look tired out there. This is four in five nights for us. We looked kind of sluggish out there. We didn’t have our mojo out there like we needed to.”

Oklahoma City’s defense started the night roughing up the Rockets. The Thunder didn’t allow a basket until there was 5:26 left in the opening quarter. This allowed the Thunder to run out to a 15-2 advantage.

It was beleaguered center Kendrick Perkins who set the tone for the Thunder. He pushed Howard out of the paint and kept him from getting good looks at the basket and from grabbing offensive rebounds. The Thunder led 26-14 after first quarter.

“Perkins did a good job of making Howard’s shots tough and also made his catches difficult,” Oklahoma City coach Scott Brooks said. “I thought he did a good job of using his strength and his body on interior defense.”

Without Westbrook in the lineup, the Rockets were able to focus more attention on Durant. But that didn’t stop the league’s leading scorer from throwing down a couple of powerful dunks on the Rockets’ defense and getting to the basket with ease as the Thunder led 56-44 at halftime.

“I’m not one of those guys that can turn it on and turn it off,” Durant said. “There will be good nights and bad nights. I just try and keep my intensity at the same level every time I step on the court.”

Durant’s shots continued to drop in second half. That included a 3-pointer over an outstretched Harden. Afterward, he turned to the Rockets’ bench and told them about it.

Breaking news, severe weather alerts, AMBER alerts, sports scores from The Norman Transcript are available as text messages right to your phone or mobile device. You decide which type of alerts you want to receive. Find out more or to signup, click here.