Two nights before return of the Westwood Invitational, head golf pro Rick Parish and others at Westwood Golf Club were putting together scoreboards.

Chapman McKown has always had a chip on his shoulder.

OKC Thunder: After up and down journey, Lindy Waters III settling in with Thunder

Usually, players who are eligible for the NBA Draft spend their entire Thursday preparing and watching on TV that night with the hope of hearing their name called.

Despite being traded from the Oklahoma City Thunder nearly three years ago, Russell Westbrook has still made efforts to give back to his former NBA home.

The workload starting pitcher Jake Bennett has endured over the past week can be summed up like so: 245 pitches, 14.2 innings.

OKLAHOMA CITY — The Texas offense was already surging when Courtney Day stepped to the plate.

It was the biggest day of the season for Oklahoma as the team prepared to play Florida in an elimination game Monday.

Oklahoma enters this weekend’s NCAA Super Regional at Virginia Tech as one of the hotter teams in the country.

OU softball: To make it back to WCWS final, Sooners kept looking forward

A five-and-a-half-hour-long lightning delay served Oklahoma well as it gave the team a chance to rest — or, in the case of some, try out their WWE wrestling skills or watch the softball team defeat UCLA — and reignite the previously hot bats in a do-or-die game.

OKLAHOMA CITY — Oklahoma needed just one win to advance to the Women’s College World Series. But after losing 7-3 against UCLA, the Sooners’ season was officially on the line.

The 2023 College Hall of Fame class could feature a few familiar names for Oklahoma.

Horning: Sooners may really be breaking the game

OKLAHOMA CITY — Though it’s been written about, spoken of, dissected and postulated, it’s never seemed as real as it seems now.

OKLAHOMA CITY — Prior to Oklahoma’s game against Texas, Jayda Coleman and Jocelyn Alo made a prediction.

There were a couple of moments, during an Oklahoma-Northwestern softball game Thursday that had plenty of fantastic ones, that really stood out among the rest.

Playing in his first NCAA Regional, John Spikerman had a mixed start to the game.

'This is the best team I've been on': Chemistry, depth boosting Sooners' postseason run

Jocelyn Alo has been on a lot of successful teams.

OU softball: Sooners confident they're 'trending in the right direction' heading into WCWS

After missing the last few weeks, including all of the postseason, OU pitcher Jordy Bahl will return to the mound for the Women’s College World Series.

It’s been an incredible season for OU’s Jocelyn Alo, who received another prestigious honor Tuesday.

With Oklahoma leading UCF by one, it was Grace Lyons who stepped up first to the plate in the third inning.

'This team is starting to peak': Sooners shut out UCF in Game 1 of super regional series

In a lot of ways, Oklahoma’s 8-0 victory over the University of Central Florida Friday blends in with the rest of the season.

Brent Venables is a passionate guy by nature.

There’s still not a timeline for Oklahoma pitcher Jordy Bahl’s return to the lineup.

'She knows we need her': Jocelyn Alo enjoying career-best season at the plate

A lot of the attention on Jocelyn Alo this season has been on her home runs. 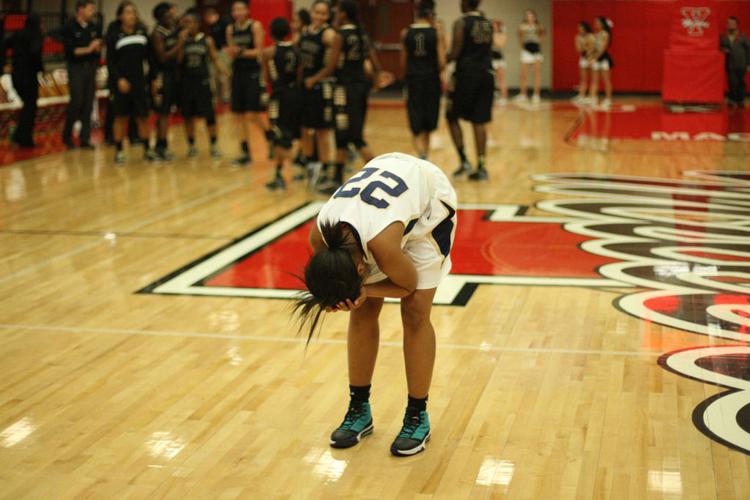 Cyndi Campbell of Southmoore feels the pain of loss as Midwest City High School celebrates in the background at Yukon Saturday, March 8, 2014. Jay Chilton / The Transcript 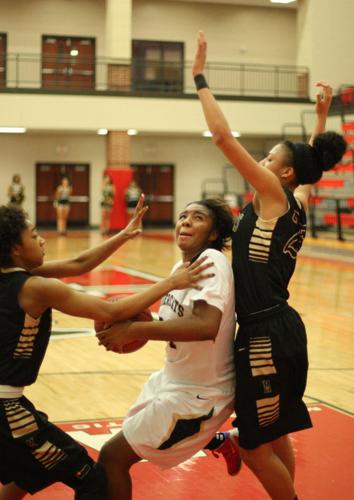 Kyeria Hannah of Southmoore is fouled during a game vs. Midwest City at Yukon Saturday, March 8, 2014. Jay Chilton / The Transcript

Cyndi Campbell of Southmoore feels the pain of loss as Midwest City High School celebrates in the background at Yukon Saturday, March 8, 2014. Jay Chilton / The Transcript

Kyeria Hannah of Southmoore is fouled during a game vs. Midwest City at Yukon Saturday, March 8, 2014. Jay Chilton / The Transcript

In early February, Southmoore’s fortunes took a drastic turn when star forward Serithia Hawkins chipped a bone in her elbow and had to miss 11 games. The team went into a tailspin and lost nine of the contests she sat out.

Hawkins returned right before the playoffs and it looked like the SaberCats were returning to early season form as they prepared to take on Midwest City in the area tournament and a state berth on the line.

But that all changed two minutes into the contest when Hawkins fought for a loose ball and fell on the same elbow. She ran off the court screaming in pain and would not return.

The Bombers won 55-51 at Yukon High to advance to the state tournament. The SaberCats season came to a sudden end.

“I think we gave our all with circumstances that were given to us,” senior Cyndi Campbell said. “I knew that my high school basketball career would come to an end, but I wanted it to end in state with my team. That’s what I’m upset about right now.”

Unlike when Hawkins was injured earlier in the year, the SaberCats didn’t fall apart right away. They found themselves still in the game deep into the fourth quarter.

With 4:30 left Kiera Hannah connected on a jumper to close deficit to 50-49. Momentum was on the SaberCats’ side and they looked like they were on the verge of pulling off the upset.

But Southmoore’s offense became frazzled after a pair of starters fouled out. That included guard Jamia Sheppard. Despite locking down the Bombers, the ’Cats scored only two points the rest of the game. It’s something coach Britney Kannady-Sayes knows may have been different if they had stayed at full strength.

“It’s tough,” Southmoore coach Britney Kannady-Sayes said. “You go in there and cry with your kids. You tell them how proud you are of them. You pick them up off the floor. You take them home and they learn from it.”

“We played great, Hannah said. “We came out and had a great game. One of our best games all season. We responded great to Serithia going down. The first time we responded horribly. Now, when she went down we were like we have to win this for her.”

Without the services of Hawkins, the SaberCats stayed in the game by outhustling the Bombers. Sheppard dove on the ground for loose balls, Campbell dug in on defense while Desha Page battled in the paint for rebounds.

Southmoore clawed back to within two after Alyssa Jones drained a 3-pointer with 1:44 left in the second quarter. They trailed 26-24 at halftime.

The SaberCats turned to Hannah in the second half, running the offense through her. Instead of relying on jumpers, the 6-foot post drove the ball to the rack and picked up fouls on the Bombers.

However, the Bombers responded with an 13-8 run and led 45-41 going into the fourth quarter.

Even though their rally fell short, the SaberCats believe they are set up for a deep run next season.

“It’s sets us up for next season real nice,” Hannah said. “Our mentality next year is going to be overall great. We’re going to get there next year. I promise that.”

Breaking news, severe weather alerts, AMBER alerts, sports scores from The Norman Transcript are available as text messages right to your phone or mobile device. You decide which type of alerts you want to receive. Find out more or to signup, click here.

Glenna Louise Millsap of Norman, Oklahoma joined Heaven's choir Saturday June 25, 2022. There will be a small service at Sunset Memorial Park Cemetery Chapel at 10am on July 7th with graveside service following. She will be greatly missed.