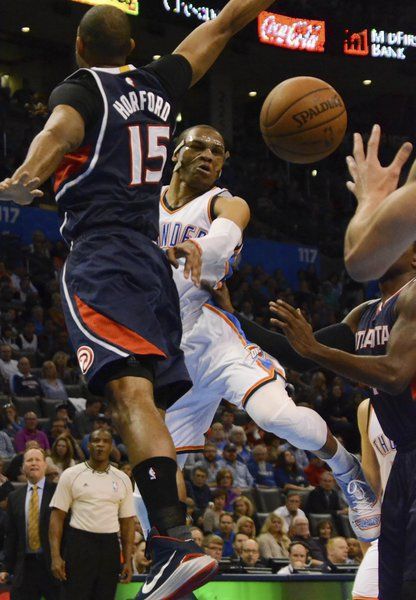 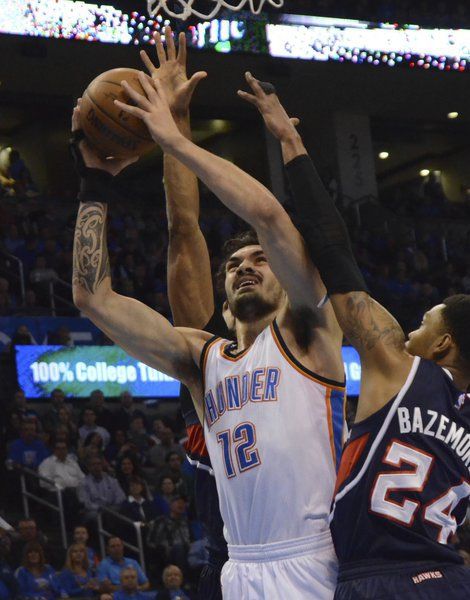 Thunder center Steven Adams goes up for a shot during the Thunder's game Friday against the Hawks at Chesapeake Energy Arena.

Thunder center Steven Adams goes up for a shot during the Thunder's game Friday against the Hawks at Chesapeake Energy Arena.

OKLAHOMA CITY — On a night when Oklahoma City had every reason to fold its tents, the Thunder may have produced their most impressive game of the season. Led by Russell Westbrook's ninth triple double, the Thunder defeated the Atlanta Hawks 123-115 Friday at Chesapeake Energy Arena.

The win came hours after the team learned Kevin Durant could miss the rest of the season.

Westbrook posted 36 points, 14 assists and 10 rebounds as Oklahoma City (39-30) kept its lead over the New Orleans Pelicans for eighth place in the Western Conference. The Hawks (53-16) have lost back-to-back games, but still lead the Eastern Conference by nine games over the Cleveland Cavaliers.

"It's tough," Hawks forward Al Horford said. "We led most of the game and let it get away. They just kept attacking and making shots. It's just a tough one to swallow."

Dion Waiters scored 26 points for the Thunder. Anthony Morrow came off the bench to hit 6 of 10 from 3-point range on his way to 21 points. The Hawks had seven players score in double figures. Pero Antic led the way with 22 off the bench. Dennis Schroder added 21 points on 7-of-14 shooting. Paul Millsap scored 19 points but was held to only three rebounds.

With 8:30 left in the fourth quarter, Atlanta held a seven-point lead. It was on the verge of going to nine, before Nick Collison came up with a block on Millsap. That sparked back-to-back 3-pointers from Morrow to close the Hawks' lead down to 103-102. Westbrook tied the game at 6:27 when he drained his own 3-pointer. Morrow followed up with long distance shot to push Oklahoma City ahead.

"It's so important, towards the end of the game, especially myself, we learn to find our shooters," Westbrook said. "(Morrow) is one of the best shooters in the world. My job is to read the defense, find him and find the shooters."

The Hawks had three chances to cut into the Thunder's lead on the same possession, but came up empty. That led to Westbrook finding Morrow in the corner for another 3-pointer and a 113-105 advantage. After Waiters stole the ball and took it in for a dunk, the Thunder led by 10 with 3:30 on the clock.

Jeff Teague finally stopped the bleeding when he hit two free throws to cut Oklahoma City's lead to eight. Westbrook got it right back with a jumper on Teague. With 1:38 left in the game, Schroder went to the free throw line. He knocked in both and the Hawks were down by six. Atlanta's DeMarre Carroll fouled Westbrook and hit both shots from the free throw line. Waiters came down on other end and blocked Schroder's layup to close out the game.

"I think tonight we just came out here, played hard, played together," Waiters said. "When we got down, we didn't get discouraged. We stayed with it. Made shots and got stops when we needed it."

NOTES: Atlanta is second in the NBA in assists at 27.5 per game. Thunder coach Scott Brooks said that is due in large part to their big men. "They have five guys who can make plays," Brooks said. "Their four and fives are some of the best passing bigs in the league. (Paul) Millsap makes plays that point guards make. ... F Nick Collison is the only Oklahoma City player who has been on the roster since the start of the season and has not missed a game due to injury. That may come to an end after Collison rolled his ankle Friday was walking on crutches after the game. "It doesn't feel good," Collison said. "We will see what it is tomorrow. Usually I know if I can play or not. I knew I couldn't play after I rolled my ankle."

Articles appearing on The Norman Transcript sports page on March 21, 2015