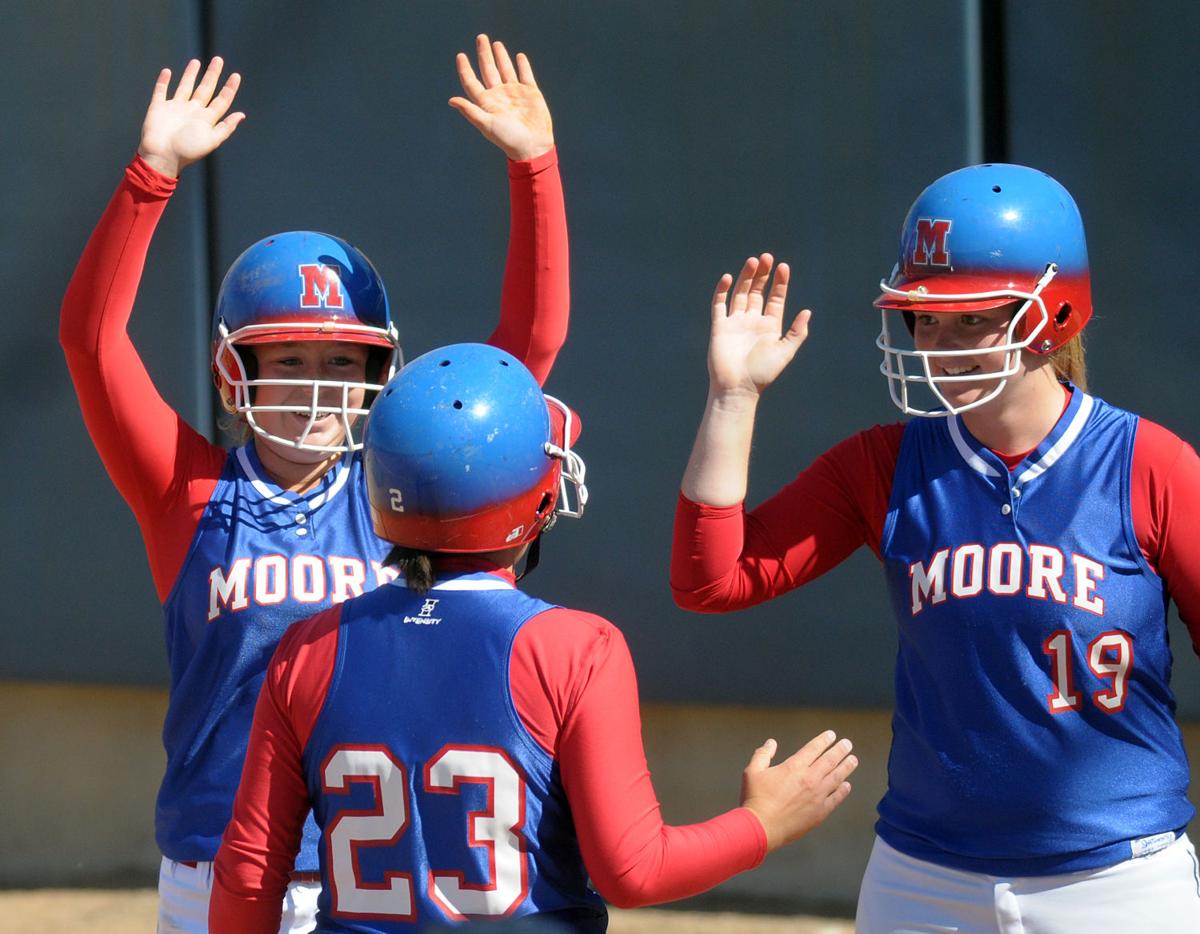 Moore players (from left) Caitlin Hall, Hannah Coker and Hannah Lynch celebrate after scoring in the bottom of the 7th inning to give MOore a come-from-behind 7-6 win over Jenks. Transcript photo by Jerry Laizure 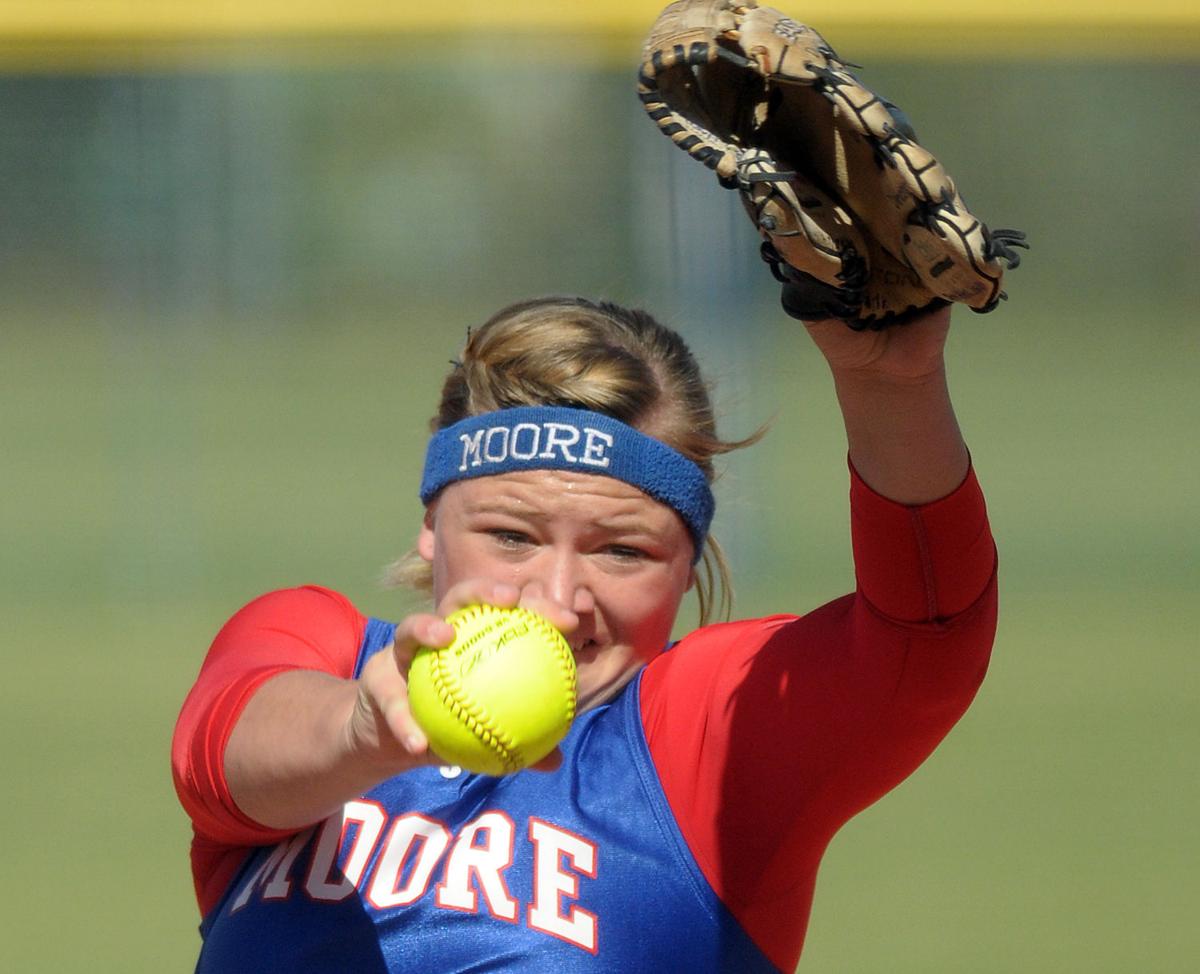 Moore players (from left) Caitlin Hall, Hannah Coker and Hannah Lynch celebrate after scoring in the bottom of the 7th inning to give MOore a come-from-behind 7-6 win over Jenks. Transcript photo by Jerry Laizure

Coming into the state fastpitch tournament, Moore coach Stephanie Riley wasn’t worried about her team’s defense. Out of all the facets of softball, that was the one that she believed would hold up.

Riley turned out to be wrong. In two games Thursday, the Lions committed six errors. While they were able to escape with a win the opening game, they fell 7-3 to top-ranked Edmond North in the nightcap at Hall of Fame Stadium.

The loss drops No. 3 Moore to the elimination game at 10 a.m. today against Jenks.

“We will just keep playing it one game at a time,” Riley said. “We will be back on the field early, ready to play at 10 a.m. Step on the field with a solid team, hopefully. We will look at our lineup, look at our defense and see if there is anything we need to do differently.”

Moore had a chance to go up 1-0 in the first inning. Reagan Sampson came to the plate with one out and runners on second and third. Sampson popped out to centerfield and Caiti Hall tagged up and took off for home. Even though she made it easily, Edmond North threw the ball to third base and the umpire called Hall out for leaving the base early.

Edmond North didn’t make Moore pay for the miscue until the bottom of the third. Madison Nordyke singled to right to score Morgan Peterson. Kady Self then knocked in Peterson with an RBI double. The Huskies led 2-0.

In the fourth, the Huskies had a chance to put the game away. With the bases loaded, Sheridon Bond came to bat. But Briana Nunley got the freshman to pop out keep the score 2-0.

After escaping the first inning without allowing a run, Edmond Norht’s Jordan Dixon settled down. She was able to induce the Lions’ lineup into pop flies and long outs.

But in the top of the fifth, Hannah Lynch finally got a good look at a Dixon pitch. The sophomore deposited the solo home run over the center field fence and closed the gap.

“When your shortstop makes three errors, it’s tough,” Riley said. “Pitching wasn’t on as much as it has been the last couple of weeks. It makes it tough. And offensively we don’t capitalize. We have one awesome homer shot by Hannah Lynch. After that, we don’t do what we need to do to score runs.”

The tournament started off on a good note for the Lions when they faced No. 9 Jenks in the first round.

The Trojans grabbed 6-2 lead and carried it into the bottom of seventh. But in what was their best hitting performance of the season, the Lions stormed back with five runs. Reagan Sampson’s two-run double plated Caiti Hall and Hannah Coker to complete the comeback and win the game.

The teams meet again today. The winner will play at 2 p.m. while the loser’s season will end.