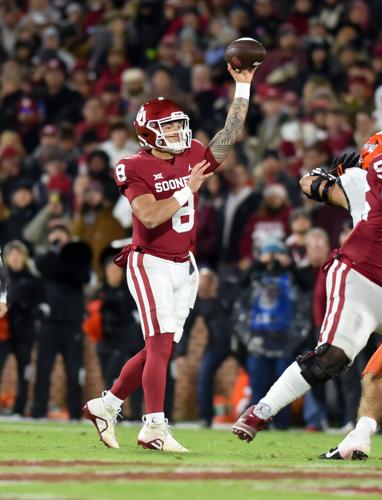 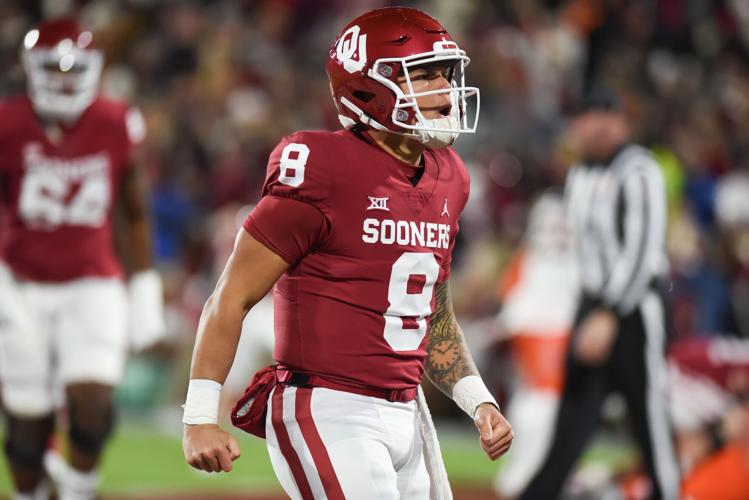 The Oklahoma offense looked as good as it has all season during the first quarter last week.

After that, the Sooners simply couldn’t find any momentum in their 15-point win over Oklahoma State.

A big reason was the Sooners’ lack of success in the passing game. OU quarterback Dillon Gabriel threw for 224 yards in the first quarter but finished with 259, and he only completed 1-of-12 passes in the second half.

It was a tough way to end the game, particularly after Gabriel finished with just 190 passing yards against West Virginia the previous week.

“It’s the same old story, just not executing,” Gabriel said Monday. “Whether it’s one piece of the puzzle or two or three, whatever it is. Just not executing. Definitely a point of emphasis. It has been, but you have to execute in those certain situations.”

Another big reason for the Sooners struggles was their inability to stay on the field. The Sooners only recorded two first downs in the second half, and none of those drives lasted longer than 1:27 of game time. The Sooners also converted on just 1-of-14 third-down attempts.

The inability to pick up first downs wasn’t the only issue with clock management. The Sooners’ offense routinely snapped the ball with a lot of time on the play clock, which kept them from taking time off the game clock in the fourth quarter. The lack of success running the ball — they recorded just 66 yards on 17 carries in the second half — didn’t help either.

The lack of time on the field allowed Oklahoma State to stay in the game and gave them several opportunities to score. OU offensive coordinator Jeff Lebby took the blame for the clock management issues during his weekly press conference Monday.

“After those first two series, the rest of it is on me getting too conservative,” Lebby said. “Everybody wants to point the fingers, it’s me being too conservative. I mean, 16 of the last 18 plays, we run the football. The first quarter, we scored a bunch of points because we were able to throw the football and make some plays. Should have stuck to that a little more and stayed aggressive, instead of what we did. I think we would have had a little different outcome.

“Thankfully, defensively, we were lights out. Our crowd was unbelievable and we were able to get it done.”

The Sooners will need to be better Saturday against Texas Tech.

The Red Raiders rank seventh in the Big 12 in scoring defense, surrendering just under 28 points per game, but they’ve been better at home. Five of their six wins have come at home, and both sides of the ball have typically performed better in Lubbock.

The Red Raiders have also been good at winning the time of possession battle. They lead the country in plays per game (88) and have been successful at staying on the field.

The OU offense knows it can’t afford to make the same mistakes it made last week.

The Sooners (6-5) can clinch a winning season with a victory against the Red Raiders. But they know it won’t be easy.

“Expecting a lot of competition,” OU receiver Jalil Farooq said. “They’re looking forward to making a statement game also. So we know we gotta come out and compete. They got a similar record. So both (of us need a win) to get a better bowl game, so I feel like we’re gonna prepare better and take advantage of our opportunities.”