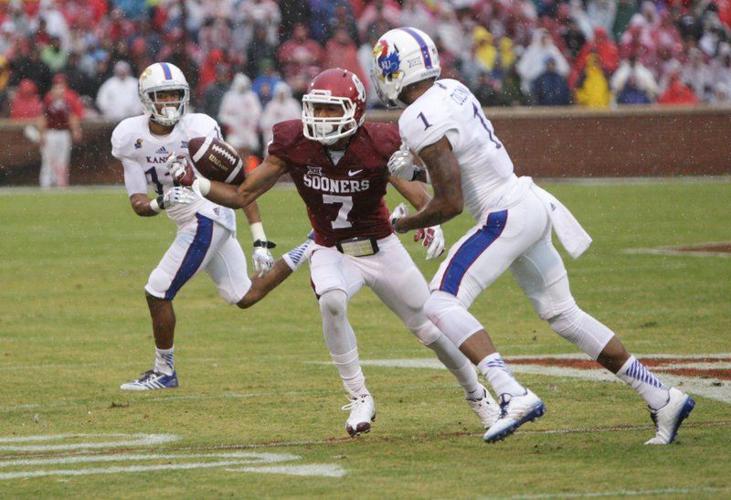 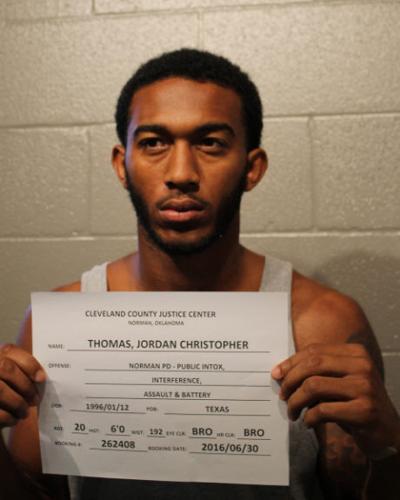 Thomas, 20, was taken to the Cleveland County Detention Center at 2:45 a.m. Thursday. He was released at 11:13 a.m. No charges have been filed at this time.

“We are aware of it and will monitor the situation and react accordingly,” OU athletic department spokesman Mike Houck said.

According to a Norman Police arrest report, officers responded to a disturbance at Logie's On The Corner. When they arrived, they saw an employee of Logie's chasing a man, later identified as Thomas, down Asp Ave. Witnesses said Thomas was involved in a fight at the bar. Police pursued Thomas through Campus Corner and lost sight of him, but shortly afterward found him hanging from a backyard fence in the 700 block of Debarr Ave., the report read.

When police placed Thomas in custody, he said he ran because the last time he was in contact with police he was arrested on outstanding warrants. According to the report, Thomas was intoxicated at the time of his arrest.

Andrew Santacroce, 22 of Norman, was also arrested Thursday morning at Logie's. According to a police report, Santacroce was kicked out of the bar for getting into a fight with a patron, and then attempted to return to the bar along with Thomas, where the two OU students got into a fight with Logie's staff. After an officer arrived on the scene, Santacroce was placed under arrest. Santacroce previously played baseball at Texas Tech University. Both Thomas and Santacroce attended Klein High School in Klein, Texas.

This isn’t Thomas’ first brush with the law. He was arrested and spent a night in jail for failure to pay a speeding ticket in Grady County back in December. Thomas did not face further disciplinary action for that offense.

Thomas was held out of the first quarter the Sooners’ 2015 season opener due to a violation of team rules and benched for the third game of the year against Tulsa due to disciplinary issues.

Thomas started the final 10 games of the season, registering 46 tackles and five interceptions. The Big 12 coaches and the Associated Press both named him a second-team all-conference performer.