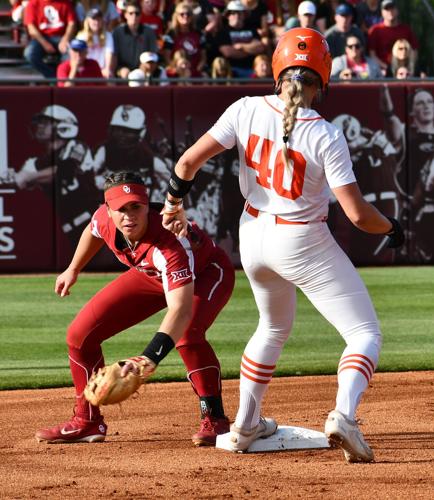 Oklahoma shortstop Grace Lyons applies the tag at second base Friday during the Sooners’ game against Oklahoma State at Marita Hynes Field. 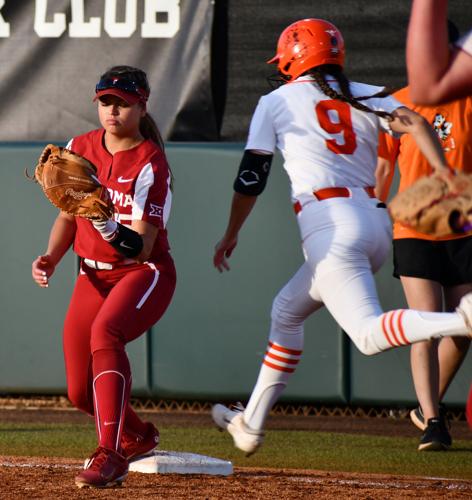 Oklahoma’s Taylon Snow gets the out at first base Friday during the Sooners’ game against Oklahoma State at Marita Hynes Field.

Oklahoma shortstop Grace Lyons applies the tag at second base Friday during the Sooners’ game against Oklahoma State at Marita Hynes Field.

Oklahoma’s Taylon Snow gets the out at first base Friday during the Sooners’ game against Oklahoma State at Marita Hynes Field.

At the same time, Rylie Boone charred the ball and fired a throw to Kinzie Hansen at home plate to try to beat out Alexander.

The ball hopped into Hansen’s mitt as she turned to tag Alexander, who was diving headfirst into home, before she could touch the plate. Video replay confirmed the call that Alexander was out to the raucous applause of the fans at Marita Hynes Field.

While the Sooners were already ahead by five runs, that play at the plate closed the door on the Cowgirls.

“It really sealed the deal on the game in my opinion,” Hansen said. “That’s what really put us in win territory.”

Grace Lyons led off in the bottom of the inning and sent the first pitch she saw out of the park, her 18th home run of the season, to score the final run in the Sooners’ 6-0 win over the Cowgirls. The win also secures the Big 12 regular-season championship for the Sooners.

Getting Alexander out at the plate didn’t just keep OSU (38-11, 14-3 Big 12) off the board, it also kept Trautwein from giving up her first earned run since February 25 — her only earned run so far this season.

“That was really, really awesome,” Trautwein said of the throw. “I was in a tough spot there and just knowing that they are behind me 1,000 percent... and obviously it was awesome to grab that momentum.”

Trautwein threw the first 5.1 innings, giving up three hits and three walks while recording four strikeouts. Jordy Bahl came in for the final 1.2 innings and gave up two walks and notched two strikeouts. The two combined for the Sooners’ 28th shutout win of the season.

OU (47-1, 16-1 Big 12) had their pitchers’ backs at the plate too. In the third inning, the Sooners loaded the bases and then brought around five runs thanks to a single by Alyssa Brito, a walk drawn by Jana Johns and a bases clearing double by Hansen.

“My teammates have been picking me up for quite some time now, so I thought it was about time that I picked them up,” Hansen said of the hit. “I’ve been feeling on the verge for a while, so I feel like today I came in with a whole new mindset and it was honestly team oriented.

“...In my opinion, I play my best ball when it comes to late May and June, so it feels good to be back at the plate.”

Hansen had been in a slump before the game, as she hadn’t recorded a hit since OU’s game against Texas on April 16.

Just as Hansen has found her groove again, so have the Sooners settled into the style of play that OU coach Patty Gasso expects from her team.

“I’m really excited about the ball that we’re playing now,” Gasso said. “All facets are working really well together, and I think we’re in a really good place. and I’m proud that we got there because I’ve been very tough with them.”

The Sooners’ regular-season conference title is their 10th in a row and 14th overall.

But for the Sooners, the focus is on the titles that are still in front of them.

“It’s just been all in, all buy-in by everybody,” Gasso said. “And here we are now, championship.”