As evidenced by the all-around showings of three athletes, the future of Oklahoma men’s gymnastics appears quite bright.

Horning: At right tempo, Sooner offense should only be better

When Brent Venables was hired as Oklahoma’s new coach, he went right to work building his staff.

Oklahoma did just more than salvage its 2022 recruiting class.

Oklahoma didn’t end up keeping Caleb Williams. But the Sooners are confident they still have their guy at quarterback.

Kennedy Brooks immediately proved to be one of the more productive running backs in college football during his Oklahoma tenure. After missing his junior season due to COVID-19 concerns, he returned for his senior year and solidified himself as one of only four running backs in program histo…

Due to inclement weather, The Transcript is printing its Feb. 3 and 4 editions early. Any additional high school prospect the Sooners sign to a National Letter of Intent after 6 p.m. will not be included in this article.

The speculation is over on Caleb Williams’ future.

Even with Oklahoma trailing Baylor at halftime Saturday, the crowd at the Lloyd Noble Center was still on its feet.

The game has changed.

Oklahoma lost another key piece in the NCAA Transfer Portal.

Another Oklahoma player has entered the NCAA Transfer Portal.

Oklahoma fans will likely recognize the latest Sooner to be inducted into the College Football Hall of Fame.

Oklahoma scored a big win in the transfer portal on Monday night.

Brent Venables has reportedly made another staff hire to bolster Oklahoma’s defense.

His legacy was secure.

Kennedy Brooks’ storied career at Oklahoma has come to a close.

Horning: Caleb Williams bound to realize he has every reason to stay

SAN ANTONIO — Caleb Williams played it cool and he played it cool, it would appear, because it’s a big decision and big decisions should be made with counsel and deliberation even if, once made, they turn out to be obvious.

SAN ANTONIO — Maybe, come spring, they’ll tell us. The players themselves will have had time to think about it, process it and come up with an answer to the question.

SAN ANTONIO, Texas — Despite a 30-3 lead at halftime, Oklahoma surprisingly struggled to put the game firmly out of reach in the second half.

SAN ANTONIO, Texas — While Oklahoma had four players opt out of the Alamo Bowl against Oregon Wednesday, Ducks’ interim coach Bryan McClendon would’ve liked to see one specific player added to that list.

SAN ANTONIO, Texas — Cale Gundy has seen a lot in his 23 seasons at Oklahoma.

OU's Marvin Mims: 'I definitely want to be here' next season

Horning: Stoops' last ride ought to be fabulous and great

In an alternative universe, perhaps, Bob Stoops has returned to Oklahoma as interim coach to put a floor under the program, lead it through preparation for the Alamo Bowl, give it one more college try and … that’s it.

It’s been 15 years since Oklahoma’s infamous loss to Oregon in 2006.

Horning: Change is good for Sooners, just listen to them

Two incongruent facts of American life we don’t spend a whole lot of time thinking about are these:

OU football: Despite rocky end to the regular season, Marvin Mims excited about the future

There was a list of questions following Lincoln Riley’s departure from Oklahoma.

Lincoln Riley’s departure to USC was surprising to nearly everybody in the college football landscape.

Brent Venables met with the media on Wednesday to discuss the recruiting process and the 13 players to have signed their national letters of intent to play football for Oklahoma.

Horning: Signing day tells us more about Venables than who'll be playing for him

Is it possible Brent Venables’ magnetic authenticity and personal sense of honor might be worth one more loss each season?

Since Caleb Williams took over as Oklahoma’s starting quarterback in October, he hasn’t spoken publicly.

Brent Venables didn’t have much time to relax after he was hired as Oklahoma’s football coach.

Spencer Rattler and Austin Stogner are transferring to USC.

It was another successful season for Nik Bonitto.

Brent Venables secured two huge victories on both sides of the ball heading into the early signing period on Wednesday.

New Oklahoma coach Brent Venables staff will include a mix of new and familiar faces.

There’s a long road ahead for Brent Venables when it comes to recruiting.

Horning: Bowl system cratering beneath the weight of its own sport

In the 70s, Steve Martin, then the nation’s hottest stand-up, could bring an arena to hysteria by feigning offense at some silly slight and exaggeratedly exclaiming, “Excuuuuuuse Meeeeee.”

Bob Stoops isn’t one to talk much about himself.

Horning: If it's about approach, perspective, authenticity, Venables exactly the right guy

Receiving his big Sooner welcome, Brent Venables apologized for having notes to fall back upon as he spoke into a microphone inside the Everest Indoor Training Center on Monday.

Brent Venables has been patient.

See the view from Max Westheimer Airport as Brent Venables, Joe Castiglione and Joe Harroz touched down Sunday night to cheers from hundreds of fans. 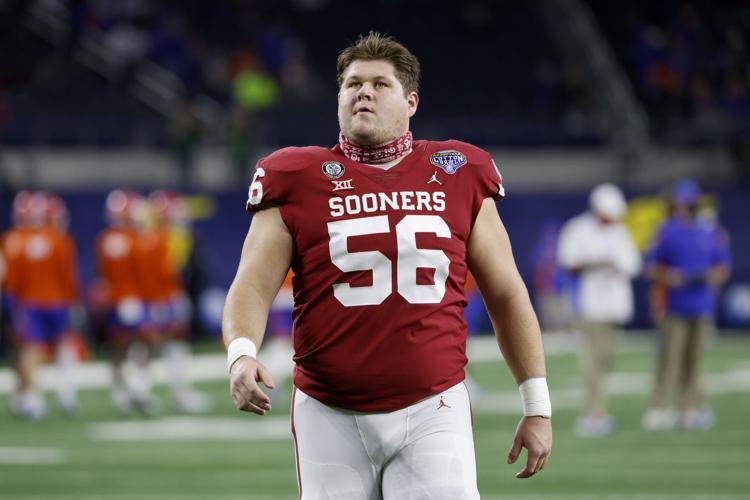 Oklahoma offensive lineman Creed Humphrey (56) warms up before the Sooners’ game against Florida at the Cotton Bowl Classic in Arlington, Texas, last December. Humphrey could hear his name called at the NFL Draft beginning tonight. 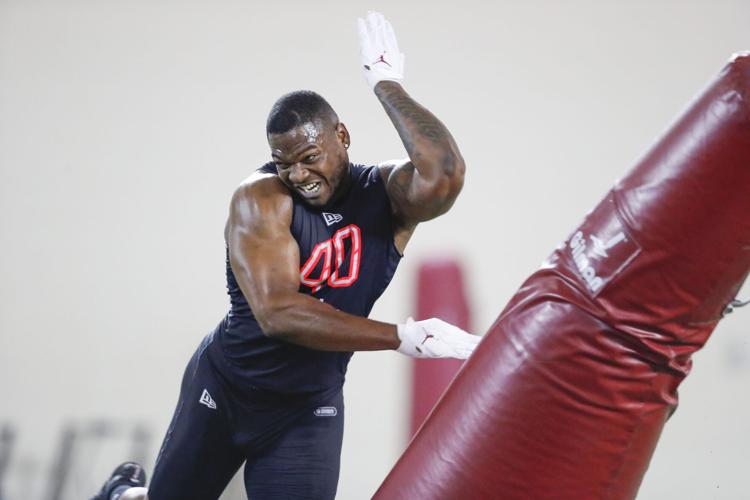 Oklahoma offensive lineman Creed Humphrey (56) warms up before the Sooners’ game against Florida at the Cotton Bowl Classic in Arlington, Texas, last December. Humphrey could hear his name called at the NFL Draft beginning tonight.

He redshirted his first season at Oklahoma before enjoying three years as the Sooners’ starting center, earning the Big 12’s Offensive Lineman of the Year award and All-America honors in both 2019 and ’20.

Humphrey’s extensive on-field experience is a luxury not all prospects can point to in a strange lead-up to this year’s NFL draft, which begins at 7 tonight in Cleveland.

Aside from the Senior Bowl, players were only able to rely on on-campus pro days to impress NFL scouts. The 2021 NFL combine never materialized even with the COVID-19 pandemic seemingly nearing its end.

Humphrey is cognizant of his good fortunte, which didn’t force his pro day to be a make-or-break performance last month.

“I definitely think it’s important for some people that don’t have a ton of tape out there,” Humphrey said following his pro day on March 12. “I’m lucky. I got to play at an early age, I got to play in a lot of games here. I’m lucky with the tape I have. I don’t think there was as much pressure for me as there could be for some other people.”

He isn’t restricting himself, however, to one position.

“I want to be on the field wherever I can be,” Humphrey said. “I see myself as a versatile guy. I can play any of the three interior positions.”

Perhaps his flexibility will play to his benefit.

It also might be OU’s best chance at a first-round pick.

The Sooners have had at least one first-rounder in each draft since 2018. OU’s highest selected player in the 2017 draft was Joe Mixon, the 48th overall pick to Cincinnati in the second round.

Humphrey figures to be the Sooners’ best option to keep the streak going with offensive line needs never out of style.

Regardless of his draft position, OU coach Lincoln Riley anticipates Humphrey can make an impact given the skill and athleticism he’s put on display the past three seasons.

“He’s a great athlete,” Riley said. “He really is. To see a center vertical jump 33 inches and run and move the way he has, it’s kind of hard to believe he’s a center, honestly, watching him. He’s done a great job. He’s trimmed down a little bit. Looks really good, moving well, lifting well.

“That’s what’s made him a really good player here, helped him become a really good player. It’s going to give him an opportunity to have a great career in the NFL, just that combination. The athleticism, the smarts, the size, the strength. He’s got a lot of what you’re looking for.”

Here’s a look at OU’s other draft hopefuls:

• Ronnie Perkins, defensive end: Unlike Humphrey, Perkins didn’t have as many opportunities to showcase himself before entering the draft.

He started half of his freshman season in 2018 and sat out OU’s first five games last season, due to suspension.

Perkins tried making up for lost time with 10.5 tackles for loss, 9 quarterback hurries and 5.5 sacks in six games. He ranks as Kiper’s No. 40 overall prospect and No. 4 defensive end.

“I’m not really worried about missing half the season affecting my draft status,” Perkins said. “Gotta talk to teams, gotta tell them the situation and how everything played out. Really, it’s all up to the team at the end of the day. It’s all up to that team and how they feel about the situation.”

Perkins sees himself as a defensive end in a 4-3 scheme but he doesn’t have a preference which defense takes him.

“Wherever my coaches feel like I fit in on the football field,” Perkins said, “that’s what I’ll do.”

• Tre Brown, cornerback: Instead of returning another season, Tre Brown chose to pursue the NFL after earning All-Big 12 honors this past season and ending his OU career with a game-sealing interception in the Big 12 championship against Iowa State.

Brown projects between a late Day 2 and early Day 3 selection and boosted his stock with his performance at the Senior Bowl.

“I feel like it really helped,” Brown said. “I’m a very underrated guy. I’m not the type to cry over not getting recognition or anything. I like to show that on the field and every chance I get, I’m gonna go hard and people are going to notice me from there.”

His speed will make him an intriguing prospect for any secondary. He ran the 40-yard dash in 4.4 seconds at OU’s pro day but felt he could have run faster.

“The people who know, know,” Brown said. “I definitely had goals, low 4.3, try to get 4.2, but that’s a technique thing, not always where you’re just going [out] there running.”

• Rhamondre Stevenson, running back: While running backs don’t carry as much value around draft weekend, Stevenson should be an easy choice for a franchise in the fifth round or later.

The hulking prospect ranks as Kiper’s seventh-best running back behind the likes of Alabama’s Najee Harris, Clemson’s Travis Etienne and former Sooner Trey Sermon, who left Oklahoma for Ohio State.

• Outside shots: Both defensive back Tre Norwood and offensive lineman Adrian Ealy left OU early to pursue the draft.

While both could sneak in as Day 3 selections, they should be high priority undrafted free agents if they don’t.

Ealy, who’s listed at 6-foot-6, spent most of his time at right tackle the past two seasons.