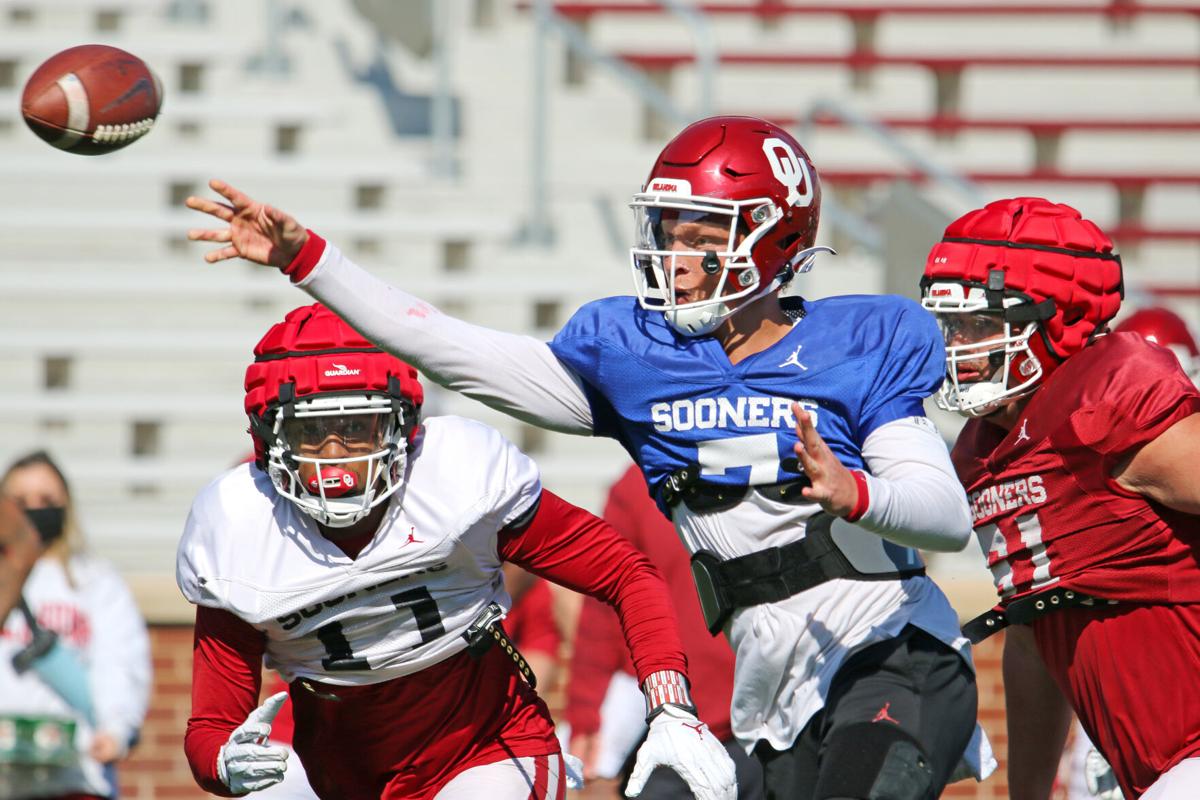 Oklahoma’s Spencer Rattler (7) throws the ball as he’s pursued by Nik Bonitto (11) during a practice this past month at Owen Field. 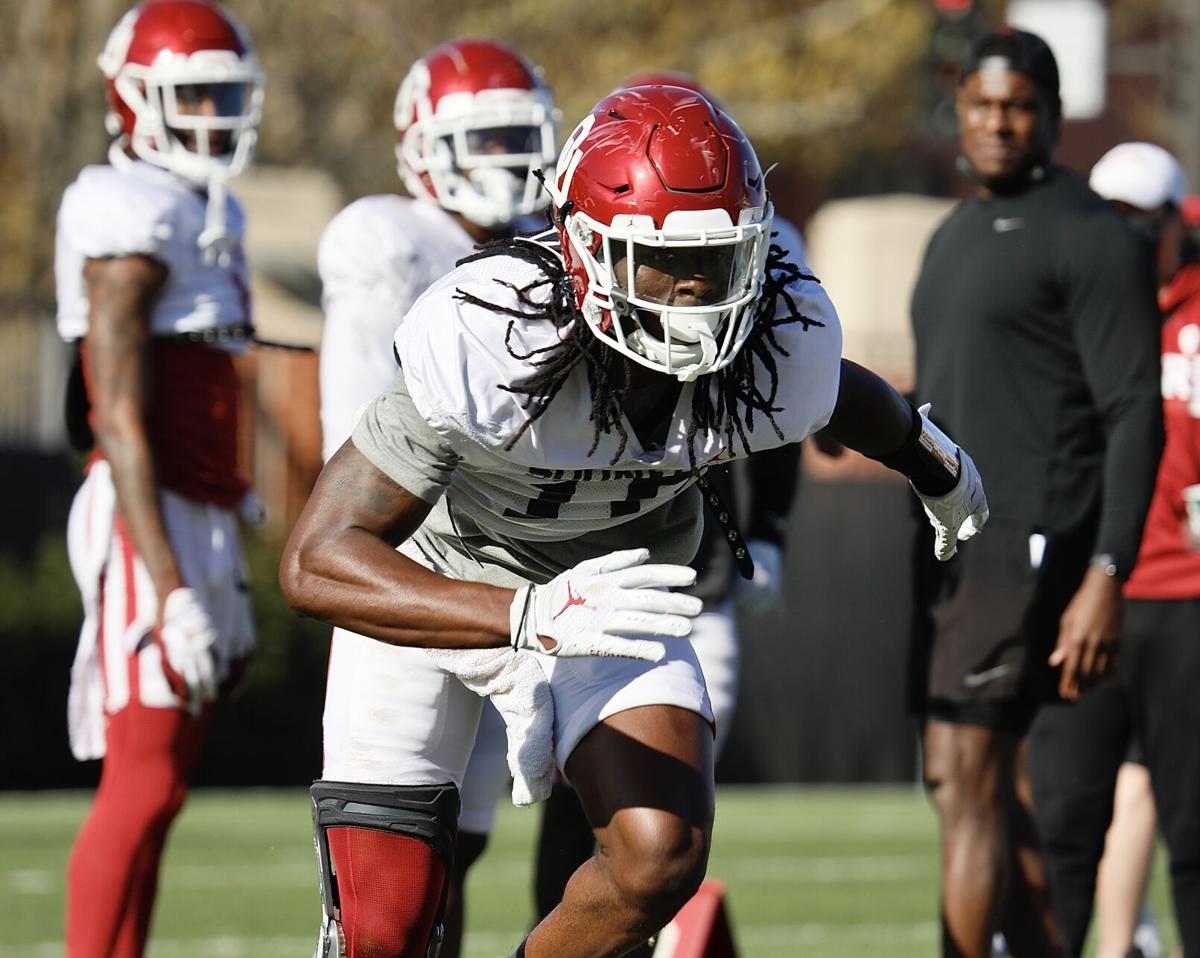 Oklahoma’s Justin Harrington goes through a drill during a practice this past month in Norman.

Oklahoma’s Spencer Rattler (7) throws the ball as he’s pursued by Nik Bonitto (11) during a practice this past month at Owen Field.

Oklahoma’s Justin Harrington goes through a drill during a practice this past month in Norman.

The Sooners will be split into their traditional red and white uniforms. OU’s roster won’t, however, be cut down the middle.

Rather, OU’s offense will represent the white team, while the defense will serve as the red squad.

The Sooners’ scrimmage will consist of two 15-minute halves and the defense will start with a 21-0 lead. The offense will be scored by standard rules, but the defense will get three points for a turnover, fourth-down stop or a missed field goal, six points for touchdowns and two for safeties.

Now that you’re up to speed, here is what to watch for from each of OU’s position groups:

• Quarterbacks: OU knows what it has in Spencer Rattler, meaning he might be in for a short day. The unofficial debut of Caleb Williams in a Sooner jersey, however, ought to raise intrigue.

The former five-star quarterback enters his first spring at OU with high expectations and has received positive reviews out of spring practices.

“You see his abilities, see some playmaking ability, which we knew he had,” OU coach Lincoln Riley said. “It’s just a fight and a climb each day to get better, to learn it, to learn his teammates, to communicate, to execute.

“But I’ve seen progression, without a doubt from day one through today. He gets a little bit better each day and that’s what I’m looking for.”

• Running backs: The Sooners’ running back situation will look much different from the fall.

Kennedy Brooks is back after opting out of the 2020 season, Eric Gray is on campus after transferring from Tennessee to OU over the winter break, Mikey Henderson has converted from h-back to running back and Rhamondre Stevenson and T.J. Pledger are both gone.

The distribution of carries will be worth noting as Brooks looks to shake off rust, Gray and Henderson get adjusted and if a returner like Marcus Major has taken another leap.

OU won’t have to split up its offensive line with the format change, so who Riley runs out as his starting offensive line ought to show where the players stand.

OU fans should also be curious to see Tennessee transfer Wanya Morris, who is expected to compete for a starting tackle position.

• Receivers: Mid-year enrollee Mario Williams has been one of the biggest standouts of the spring. He’s been praised for the speed and intelligence he brings to the group.

“For a young man who still should be in high school right now, he’s awfully impressive out there,” OU assistant Cale Gundy said. “And he’s fast. He’s got speed. We were talking out there and I made a comment on the headsets that ‘you typically don’t see balls overthrown to the real fast guys.’”

He and Marvin Mims should provide a solid test to OU’s secondary, which has been hit with injuries this offseason.

• Defensive backs: Speaking of which, the Sooner secondary is undergoing major changes.

Tre Brown, Tre Norwood and Brendan Radley-Hiles have departed the program, while safety Pat Fields is injured but set to return for the 2021 season.

So, OU’s less experienced defensive backs should get ample opportunity not only today but all spring to get reps.

OU junior Justin Harrington, a 2020 junior college transfer, is a player to watch. He sat out last season with an injury and is expected to compete for playing time this fall.

• Defensive line: OU’s defensive line is as solid as ever with the likes of Perrion Winfrey, Isaiah Thomas and Nik Bonitto returning for another season.

The big question is how is defensive tackle Jalen Redmond coming along.

The Midwest City native opted out of the 2020 season but returned to team practices for OU’s bowl game. He will be interesting to watch, as will Jordan Kelley and Josh Ellison, both of whom Riley has heralded as breakout players this spring.

• Linebackers: Much like defensive line, OU is as deep at linebacker as it has in some time.

The group is led by the likes of David Ugwoegbu, DaShaun White and Brian Asamoah. Expect the Sooners to dip into its younger talent.