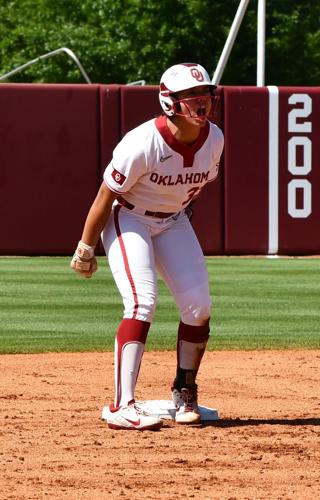 Alyssa Brito encourages her team on second after her 2 base hit Friday during the NCAA Tournament Super Regional game with University of Central Florida, Marita Hynes Field. 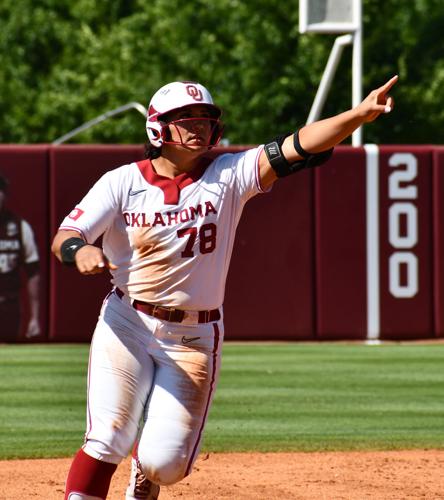 Alyssa Brito encourages her team on second after her 2 base hit Friday during the NCAA Tournament Super Regional game with University of Central Florida, Marita Hynes Field.

In a lot of ways, Oklahoma’s 8-0 victory over the University of Central Florida Friday blends in with the rest of the season.

The game gave the Sooners their 53rd total victory of the season and their 38th run-rule win. It’s also the 32nd game the Sooners have held their opponent scoreless and the third time in four playoff games.

However, for OU coach Patty Gasso, the win to open the NCAA Super Regional at Marita Hynes field was representative of something bigger.

“What I feel is happening right now is this team is starting to peak, and that is a good thing,” Gasso said. “We’ve been kind of waiting. We’ve been playing well. We’re beating teams, but we haven’t been at our best.”

It started with the Sooners’ pitching. With freshman star Jordy Bahl out again with arm soreness, Hope Trautwein got the call on the mound, and the redshirt sophomore delivered.

She pitched all five innings and held the Knights without a hit, adding two strikeouts while forcing seven fly-outs and four ground-outs. Her only blemish was walking three batters, but Trautwein set the tone for the Sooners defensively.

“Hope doesn’t need strikeouts,” Gasso said. “She got a few, but nobody really squared up her real hard so I’m proud of that. There were a few miscues in the way of base on balls, but she came back and reset and fixed that. She was outstanding today.

Offensively, the Sooners scored runs like they normally do, but the way they scored stood out.

With the team facing two outs in the second inning, Jayda Coleman — who scored the team’s lone run in the first inning — responded with a double to centerfield that scored Taylon Snow and Alyssa Brito. Jocelyn Alo then came to bat and recorded a three-run home run to push the Sooners’ lead to 6-0.

“I was just looking for something hard to hit,” Alo said. “Jayda came up clutch before that, and I don’t like to be the last out of the inning.”

The Sooners kept it up in the bottom of the third. Kenzie Hansen’s sacrifice fly scored Grace Lyons, and Jana Johns’ double to right field scored Brito with the team again facing two outs.

Six of the Sooners’ eight runs came with the team facing two outs, which proved to be crucial.

“Two-out rallies are big and they create even more momentum,” Gasso said. “[They’re] clutch, lead-off batters like Jayda Coleman are clutch, so we’re really feeling it all around.”

The defending-champion Sooners (53-2) now need just one more win to return to the Women’s College World Series. and for Gasso, the team might be playing its best at the right time.

“Our defense is astounding right now,” Gasso said. “About mid-season, you heard me talk a little bit about concerns about us being a little messy on defense. The pitching staff is on point.

“Everything is kind of hitting on the right cylinders right now.”

The Sooners will play at 1 p.m. Saturday to win the super regional and advance to the WCWS. The game will be broadcast on ESPN.