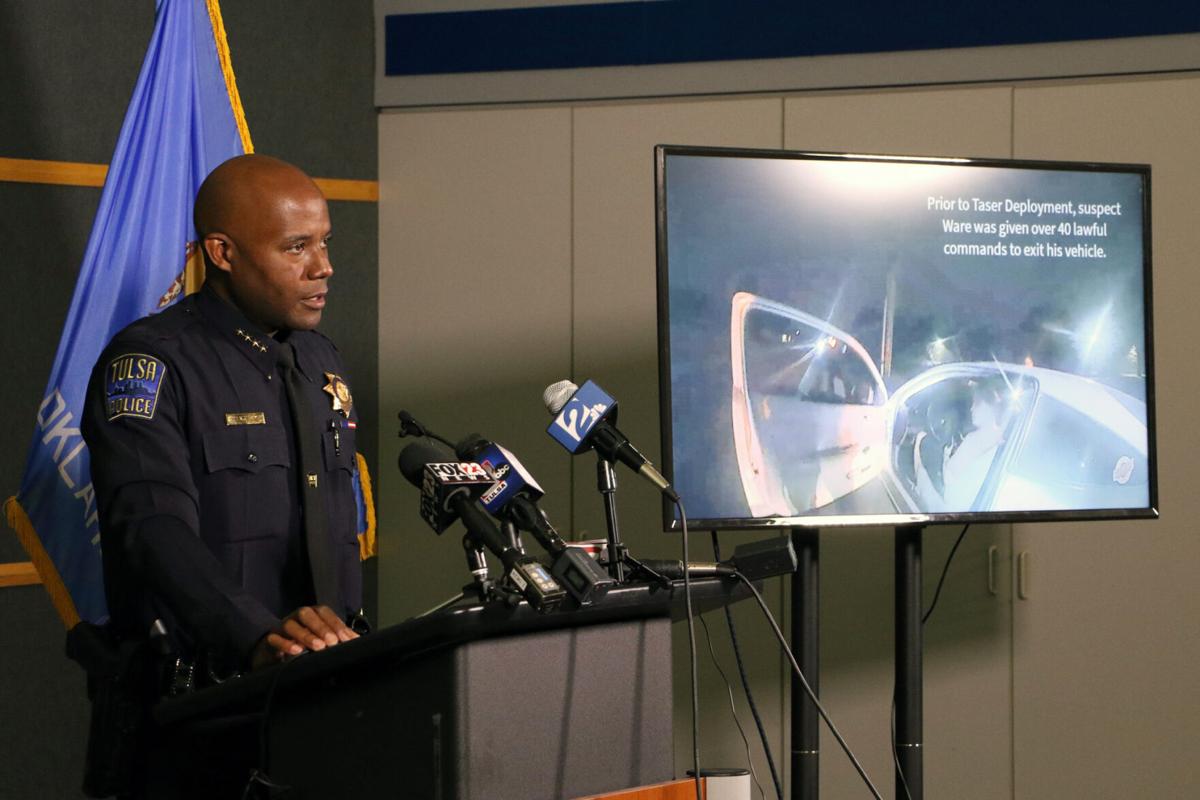 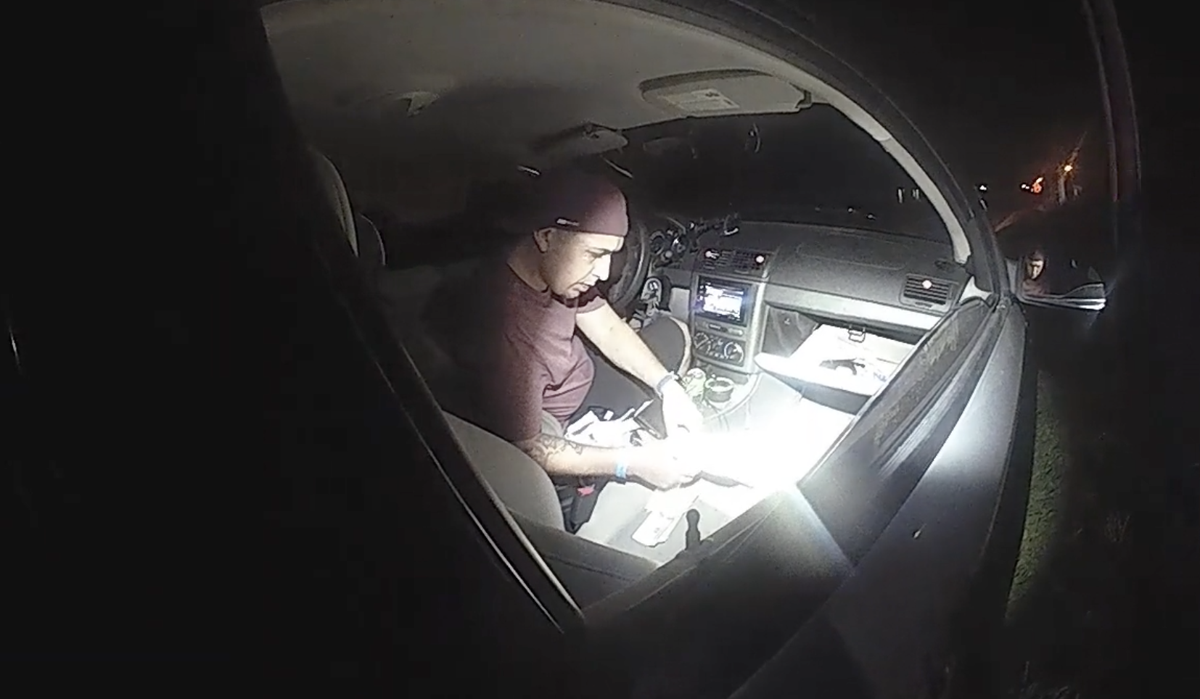 David Ware, as seen from a body worn camera. Courtesy

Video showing a Tulsa man shooting two officers, killing one, earlier this summer was released on Monday after weeks of court wrangling that saw the recordings barred from public viewing.

The video shows David Ware, 32, shooting and killing Tulsa Police Department Sgt. Craig Johnson and wounding officer Aurash Zarkeshan on June 29. Johnson died the following day while Zarkeshan survived and is recovering. Ware fled the scene of the shooting but was arrested without incident the next day and was later charged with first-degree murder and shooting with intent to kill.

Johnson’s memorial service was held at Victory Christian Church in south Tulsa and was attended by thousands, including Gov. Kevin Stitt. Hundreds of Tulsans lined the streets for Johnson’s funeral procession.

Police released four videos on Monday — body camera footage from both Zarkeshan and Johnson, as well as a dash camera video from Zarkeshan’s vehicle and another video with different views spliced together.

The interaction between Ware and officers lasted less than 20 minutes, most of which was an extended, sometimes aggressive, negotiation between the two parties as the officers first attempted to coax Ware out of the vehicle before eventually using force.

At first, Zarkeshan tells Johnson he’s probably going to tow the vehicle, which had an expired paper tag. Then he tells Ware — after Ware says “you guys always fuck with me” — that he has a history of “narcotics and drug paraphernalia.”

“That was dropped,” Ware responds. Zarkeshan then opens the driver side door as Johnson urges him “David just step out of the car, dude.”

“I’m not stepping out of the car … you better call your supervisor or something,” Ware says in the video to Zarkeshan.

“You have two choices,” Johnson tells Ware. “You can step out of the car … or we can Tase you.”

“Ok, I don’t know where you got your law degree,” Johnson says in the video.

“I don’t have a law degree,” Ware responds.

“Then shut up and get out of the car,” Johnson says.

Both officers had hands on Ware as he was finally pulled from the car, and the video shows him reach under the steering wheel before he’s dragged from the seat. During the struggle he fires a short sequence of gunshots.

Johnson can be heard saying “What the” before he was shot in the chest. Franklin said Monday the round pierced Johnson’s vest and entered his chest.

As Johnson is lying on the ground screaming, Zarkeshan has backed away a short distance but is quickly shot multiple times by Ware, who points the gun a final time at Johnson and pulls the trigger. At this point both officers are quiet and Ware can be heard running from the scene, screaming.

The video’s release had been delayed for months due to a court order. But Ware’s attorney described what he referred to as inaccuracies between what the video showed and what police originally said happened the day of the shooting. The court order expired Monday, and Tulsa police held a press conference and later released the video.

In the affidavit, Tulsa Police said Ware stood over an already wounded Johnson and fired three shots at him. Police chief Wendell Franklin, who was appointed to the position in January and became the city’s first Black police chief, held a press conference after the shooting and gave a similar description of Ware’s actions.

But Ware’s attorney, Kevin Adams, called the description inaccurate and said it was part of an attempt by the police department and district attorney’s office to paint Ware as a “cold, calculated killer.” Adams said he believed District Attorney Steve Kunzweiler intended to seek the death penalty against Ware and that if that were to happen, Oklahomans deserved to see for themselves how accurate the initial description of the encounter between police and Ware was.

Franklin opened Monday’s media conference by saying that criminals “have more rights” than citizens or police officers, and that the public “would never” see a criminal being executed, “but here we are watching the execution of a police officer. What kind of society is that?”

He said the discrepancies between the initial police report and what the video showed were not intentional deceptiveness, but instead a matter of officers quickly relaying what happened at the scene, a sort of game of telephone where the truth gets slightly distorted as it passes from officers to the public.

“We are as accurate as we can be, but realistically the discrepancies don’t matter,” Franklin said.

Adams, who was court appointed to represent Ware, told The Frontier on Monday that “it’s not a discrepancy, it’s a lie.”

“Somebody at TPD out-and-out lied (in the police report and initial press conference the day of the shooting,)” Adams said. “And it absolutely makes a difference when our public officials lie to us.”

Adams said again that he felt like the initial portrayal of the shooting was meant to show Ware as a “cold-blooded killer,” someone who was initially described as calmly shooting the two officers then casually walking away from the scene. But the video showed Ware pleading for 15 minutes with officers to let him go, shooting the officers and then sprinting from the scene screaming.

“They knew what they were doing,” Adams said. “They were doing everything possible to make him look like a cold-blooded killer who stood over him and slowly walked away, which is what the chief claimed. There’s no possible way you could watch that video and get the impressions that they put in the affidavit and what the chief said in his (initial) press conference.

“These are not discrepancies, they are lies. The chief lied or somebody lied to him that caused him to say something that was untrue.”

Franklin repeatedly said he did not believe the video should have been publicly released, and said there were portions of the video he had not fully watched until the court ordered the department last week to release the video.

Franklin asked the public not to view or share the video, saying that local police officers are still traumatized over the shooting.

“The court, the evidence, should outweigh the public interest, in my opinion,” Franklin said. “Let this video play out in court, let the judge and juries be the ones to view it.

Adams said he believed the video would likely still be barred from public viewing had there not been discrepancies between the police report and the actual video.

“Yeah, because I’m the one who asked for it to be released because I felt like there were lies being told,” Adams said. “I wouldn’t have been going nuts about it if they hadn’t lied about the video.”

Tulsa Mayor G.T. Bynum, who appointed Franklin as chief earlier this year, issued a statement on social media Monday saying that he had wept after watching the recordings.

“I have to watch a lot of body camera footage as part of my job,” Bynum wrote. “I can only think of two times in my life — upon the death of family members — when I wept like I did watching the conclusion of this video. It is terrible.”

He said he understood “the legal reasons” for the release of the videos, but “if you revere these brave men as I do, then don’t watch this video. Don’t share it. Just say a prayer for them, their families, and all who risk their lives to keep us safe.”

Editors note: We are publishing one of the videos of the shooting because we believe it is a public record and a matter of public interest. The video shows the interaction between Ware and the officers for about 10 minutes before the shootings, which are graphic, occur. We’ve added a lengthy pause and disclaimer before the video, which we’ve also age-restricted.

Colton James Neyman, (26) of Noble passed away on October 19th at the Norman Regional Hospital. His Funeral Service is pending with McMahans Funeral Home.